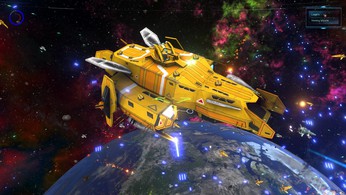 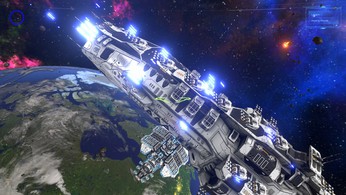 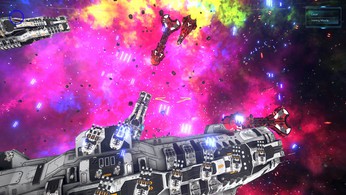 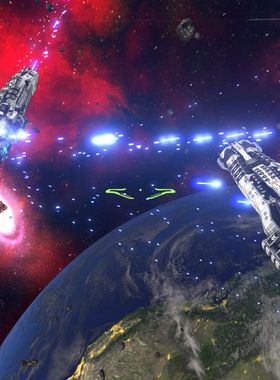 Experience epic space battles while piloting a small, fast fighter ship as part of a fleet that lashes out against enemy factions across stunning procedurally generated star systems in Disputed Space.

Pilot your ship by rapidly strafing, aiming, dodging, and shooting

Play as part of a large fleet

Large battles with dozens of ships and thousands of projectiles

Disputed Space supports 2-4 player local co-op split screen multiplayer in addition to the single player mode. Friends can jump an existing space battle by simply pressing the fire button on their game controller or joystick. Disputed Space will automatically add the additional local co-op player to the game and split the screen for the players. This mode is a blast to play with friends and family.

Disputed Space is a fast-paced arcade action game, not a realistic simulator. It is a 6DOF game that plays like Descent or Overload, but in outer space instead of inside a mine. Players pilot a small fighter ship that can fly in any direction (including backwards) while blasting enemy ships with lasers and missiles.

Disputed Space is designed to play like Descent or Overload, but in outer space instead of inside a mine. As such, the default control scheme is set up as an arcade action style which makes it easy to aim and strafe. If players prefer to have Disputed Space play more like a flight simulator, they can customize their control scheme. All keyboard, mouse, game controller, and joystick controls can be re-mapped to suit each players unique play style.

Where can I buy a Disputed Space Key?

With GameGator, you are able to compare deals across verified and trusted stores to find the cheapest Disputed Space Key for a fair price. All stores currently listed have to undergo very specific testing to ensure that customer support, game deliveries, and the game keys themselves are of the highest quality. To sweeten the deal, we offer you specific discount codes, which you will not be able to find anywhere else. This allows us to beat all competitor prices and provide you with the cheapest, most trustworthy deals. If the current cheapest price for Disputed Space is too high, create a price alert and we will alert you through email, SMS, or discord the moment the Disputed Space price matches your budget.

Can I play Disputed Space immediately after the purchase?

What store should I choose for the best Disputed Space Deal?