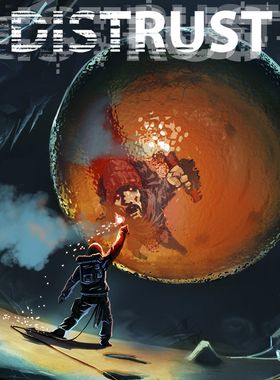 Inspired by John Carpenters "The Thing."

A helicopter crash left a group of explorers stranded near an Arctic base. As they try to find a way back, all they are doing is sinking deeper into a nightmare scenario. When they sleep, they attract a terrifying force that sucks the life out of their bodies, but the longer they battle exhaustion and stay awake, the less likely they are to survive...

As the survivors try to sleep just enough to stave off fatigue without dying, they slowly go mad and eventually reach the point where they can no longer trust their senses. In time, they cant even tell the difference between reality and a hallucination.

Guide the survivors through a randomly generated Arctic base, overcome the severe climate and fight the unfathomable!

15 characters with unique skills and abilities

Altered perception of reality: you cannot trust what you see

Where can I buy a Distrust Key?

With GameGator, you are able to compare 17 deals across verified and trusted stores to find the cheapest Distrust Key for a fair price. All stores currently listed have to undergo very specific testing to ensure that customer support, game deliveries, and the game keys themselves are of the highest quality. To sweeten the deal, we offer you specific discount codes, which you will not be able to find anywhere else. This allows us to beat all competitor prices and provide you with the cheapest, most trustworthy deals. If the current cheapest price of $0.84 for Distrust is too high, create a price alert and we will alert you through email, SMS, or discord the moment the Distrust price matches your budget.

Can I play Distrust immediately after the purchase?

What store should I choose for the best Distrust Deal?