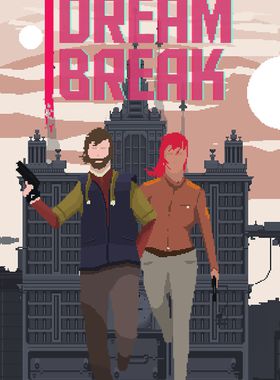 An authoritarian state pacifying the masses with propaganda. A brutal police force that shoots first then shoots some more.

An ordinary everyman named Eugene, dragged by coincidence and circumstance from a life of mundane menial tasks into a baffling world of sudden, inexplicable murder, hidden conspiracy and unrelentingly lethal robots with nasty sharp pincers and lasers coming out of everywhere.

Depicted in a distinctive Cyrillic pixel art style the cyberpunk city crackles with tech-noir intrigue and neo-digital deceptions. Using every tool at your disposal help Eugene to unpick the knot of mystery that he has become enmeshed within – your equilibrium will be rocked as you point and click a path through this briar patch of tangled meaning and unexpected quixotic quirks.

Will Eugene make sense of the conundrum that unfolds before him, learn who is an ally or a foe and collect lots of vinyl records for his listening pleasure? Hell race rapid hover bikes to earn sub-cultural respect, rub shoulders with high society in a post-modern nightclub, hack the brains of pursuing drone cops in thrill-packed chase sequences, strive to survive tense shootouts with merciless law enforcers and enjoy some 8-bit cowboy coin-op action in a dingy dive bar with a broken toilet.

Where can I buy a Dreambreak Key?

With GameGator, you are able to compare 8 deals across verified and trusted stores to find the cheapest Dreambreak Key for a fair price. All stores currently listed have to undergo very specific testing to ensure that customer support, game deliveries, and the game keys themselves are of the highest quality. To sweeten the deal, we offer you specific discount codes, which you will not be able to find anywhere else. This allows us to beat all competitor prices and provide you with the cheapest, most trustworthy deals. If the current cheapest price of $0.73 for Dreambreak is too high, create a price alert and we will alert you through email, SMS, or discord the moment the Dreambreak price matches your budget.

Can I play Dreambreak immediately after the purchase?

What store should I choose for the best Dreambreak Deal?