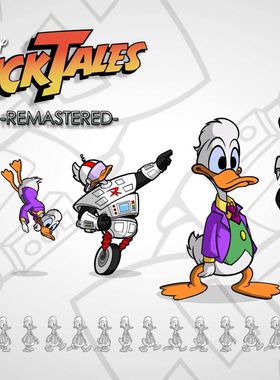 DuckTales: Remastered is a beautiful hand-crafted reimagining of one of the most cherished 8-bit titles of all time. Go back to one of the golden ages of gaming, now refined with a level of detail that will please the most hardened devoted Disney or retro Capcom fan alike. Featuring hand-drawn animated sprites, authentic Disney character voices talent and richly painted level backgrounds from the classic cartoon TV series, Scrooge McDuck and family come to life like never before. The gameplay retains the authenticity of its 8-bit predecessor; simple and fun, with slight modifications to improve gameplay flow and design. Embark on an authentic DuckTales adventure, as Scrooge McDuck and his three nephews Huey, Dewey and Louie travel to exotic locations throughout the world in their quest to retrieve the five Legendary Treasures.

Where can I buy a DuckTales Remastered Key?

With GameGator, you are able to compare 21 deals across verified and trusted stores to find the cheapest DuckTales Remastered Key for a fair price. All stores currently listed have to undergo very specific testing to ensure that customer support, game deliveries, and the game keys themselves are of the highest quality. To sweeten the deal, we offer you specific discount codes, which you will not be able to find anywhere else. This allows us to beat all competitor prices and provide you with the cheapest, most trustworthy deals. If the current cheapest price of $2.90 for DuckTales Remastered is too high, create a price alert and we will alert you through email, SMS, or discord the moment the DuckTales Remastered price matches your budget.

Can I play DuckTales Remastered immediately after the purchase?

What store should I choose for the best DuckTales Remastered Deal?