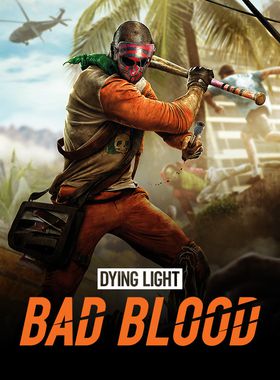 Enter a zombie-infested area and compete as one of 12 players to become the only survivor - or make a team and fight for survival together. Scavenge for weapons, destroy zombie hives to level up, and combine your advanced parkour mobility with brutal combat skills to outrun, outsmart, and outplay your opponents.

It's all in, one out in Dying Light: Bad Blood - a fast-paced and gory online game that creatively blends PvP and PvE combat while retaining the core of Dying Light's iconic gameplay. Kill the zombies and destroy their hives to collect blood samples and level up your character. Prey on other players, steal their loot, and become the only one to leave the zone alive.

Whether you run for your life, chase another player or race to the evac chopper, it's your parkour skills that give you an edge over the enemies Immerse yourself in the blood-soaked FPP combat known from the highly-acclaimed Dying Light, now with greater tactical depth, new moves, and tons of vicious weapons.

Add the element of cooperation to your ruthless fight for survival. Team up with your co-op partner, coordinate your attacks and watch each other's back to get rid of other teams and evacuate together.

Where can I buy a Dying Light: Bad Blood Key?

With GameGator, you are able to compare 9 deals across verified and trusted stores to find the cheapest Dying Light: Bad Blood Key for a fair price. All stores currently listed have to undergo very specific testing to ensure that customer support, game deliveries, and the game keys themselves are of the highest quality. To sweeten the deal, we offer you specific discount codes, which you will not be able to find anywhere else. This allows us to beat all competitor prices and provide you with the cheapest, most trustworthy deals. If the current cheapest price of $0.74 for Dying Light: Bad Blood is too high, create a price alert and we will alert you through email, SMS, or discord the moment the Dying Light: Bad Blood price matches your budget.

Can I play Dying Light: Bad Blood immediately after the purchase?

What store should I choose for the best Dying Light: Bad Blood Deal?