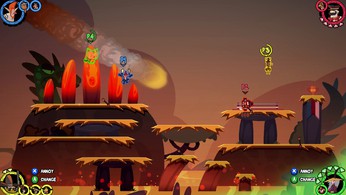 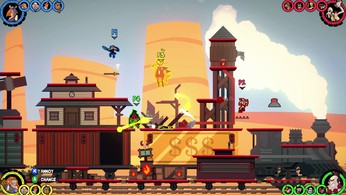 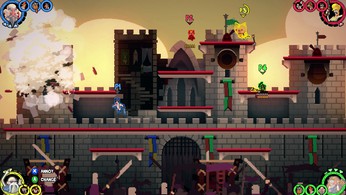 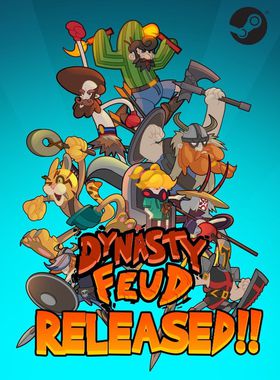 Dynasty Feud is a competitive, team-based, fast-paced platform brawler for 2-4 players. Play either local or online and show off your skills with 40 characters, one-hit kills, multiple fighting skills and a lot of style.

OK, but... what does that mean? Well, Dynasty Feud is different from other brawlers out there, taking inspiration from several genres to offer an experience that is faster, leaner, and a lot of fun!

Beat other dynasties in the ultimate battle between time periods in free-for-all and team matches.Customize your own dynasty in the ALL-STAR MODE.Challenge other players in quick ONLINE matches or rise to the top in RANKED MODE.Master all 40 CHARACTERS of the 8 DYNASTIES currently available!

In Dynasty Feud you won't pick a character to fight, you will pick a whole dynasty formed by 5 of them. The characters are your life bar, if you lose all of them, that's it, you are done. What, really? No way! And they die fast, really fast, REALLY REALLY FAST; one hit and that character is gone. Yeah, gone. The next character will appear, but it will be a totally different one, with its own weaknesses and strengths.

Value your characters and measure your movements carefully. Knowing their capacities and how to use them is as important as knowing your enemies. Plus there are 40 like this, so... have fun. A miscalculated jump, a surprise burst or missed attack can be the difference between death and glory. Uuuhh, that sounded serious.

From melee juggernauts to sneaky snipers, along with invisible ninjas and a TNT-loving cactus, a true Dynasty Master can adapt to any opponent by making the most of each of its family members.

Where can I buy a Dynasty Feud Key?

With GameGator, you are able to compare 4 deals across verified and trusted stores to find the cheapest Dynasty Feud Key for a fair price. All stores currently listed have to undergo very specific testing to ensure that customer support, game deliveries, and the game keys themselves are of the highest quality. To sweeten the deal, we offer you specific discount codes, which you will not be able to find anywhere else. This allows us to beat all competitor prices and provide you with the cheapest, most trustworthy deals. If the current cheapest price of $2.74 for Dynasty Feud is too high, create a price alert and we will alert you through email, SMS, or discord the moment the Dynasty Feud price matches your budget.

Can I play Dynasty Feud immediately after the purchase?

What store should I choose for the best Dynasty Feud Deal?