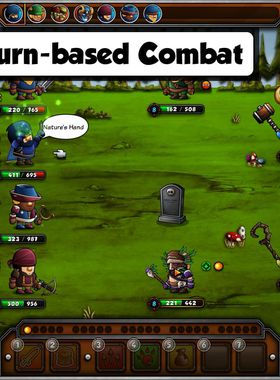 You are the General Manager and CEO of your very own Adventuring Agency, the riskiest yet most lucrative business in the Realm of Astraeus. Recruit adventurers, negotiate their contracts, send them out on dangerous quests and reap the rewards should they make it out alive. Expand your Agency, manage your growing resources and best your competitors to become the Epic Manager!

Epic Manager is a fresh new take on the Tycoon RPG genre, heavily inspired by classics we all know and love! The game presents a unique mix of roster management and character progression found in titles like Football Manager or Final Fantasy Tactics, narrative choices & consequences in the beloved tradition of gamebooks series Choose Your Own Adventure, the epic scope of a D&D campaign or a Lord of the Rings novel and the humoristic tone of The Princess Bride, all in one awesome package!

Your goal is to gain the title of Epic Manager by becoming the most famous Adventuring Agency in the vast Realm of Astraeus.

Where can I buy a Epic Manager Key?

With GameGator, you are able to compare deals across verified and trusted stores to find the cheapest Epic Manager Key for a fair price. All stores currently listed have to undergo very specific testing to ensure that customer support, game deliveries, and the game keys themselves are of the highest quality. To sweeten the deal, we offer you specific discount codes, which you will not be able to find anywhere else. This allows us to beat all competitor prices and provide you with the cheapest, most trustworthy deals. If the current cheapest price for Epic Manager is too high, create a price alert and we will alert you through email, SMS, or discord the moment the Epic Manager price matches your budget.

Can I play Epic Manager immediately after the purchase?

What store should I choose for the best Epic Manager Deal?