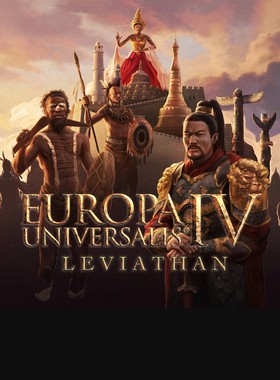 In the Europa Universalis IV: Leviathan expansion, you get new tools to centralize and accumulate power for your country. New diplomatic actions give you the means to go up against mightier counterparts and new economic tools will allow you to establish rich vassal empires that draw wealth and development to your monumental capital city.

Ask for Favors: Curry favors with other nations and use them to advance diplomatic goals.

New Regency Options: Regency councils represent the interests of the most powerful estate, and can be extended to delay the ascension of an unfit monarch.

Concentrate Development: You can now steal development from your vassals or territorial possessions to enhance the power of your capital city.

Pillage Capital: Loot an enemy capital as a condition of peace, hauling development back to the capital metropolis.

Expand Infrastructure: Provinces can expand their capacity to build new structures and manufactories, allowing smaller nations to create centers of wealth for a modest cost.

Totemism: Nations that follow the Totemist religion can revere a pantheon of past leaders, earning bonuses that reflect the skills they had in life.

Where can I buy a Europa Universalis 4: Leviathan Key?

With GameGator, you are able to compare 11 deals across 7 verified and trusted stores to find the cheapest Europa Universalis 4: Leviathan Key for a fair price. All stores currently listed have to undergo very specific testing to ensure that customer support, game deliveries, and the game keys themselves are of the highest quality. To sweeten the deal, we offer you 3 specific discount codes, which you will not be able to find anywhere else. This allows us to beat all competitor prices and provide you with the cheapest, most trustworthy deals. If the current cheapest price of $10.49 for Europa Universalis 4: Leviathan is too high, create a price alert and we will alert you through email, SMS, or discord the moment the Europa Universalis 4: Leviathan price matches your budget.

Can I play Europa Universalis 4: Leviathan immediately after the purchase?

What store should I choose for the best Europa Universalis 4: Leviathan Deal?