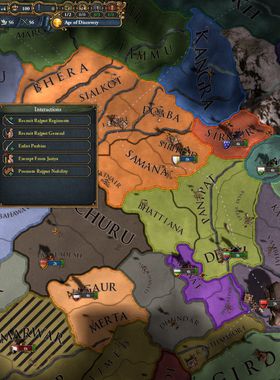 A region rich in history and culture promises great material riches to the empire that can control its trade. The competition for territory and access to the wealth of India requires diplomatic tact and some military muscle. But who is exploiting whom in this great game in the world's most profitable markets?

Europa Universalis IV: Dharma is a new expansion for Paradox Development Studio's classic game about exploration and empire building in the early modern era. Dharma devotes its greatest attentions to the battles over the control of India's trade and territory. It also hopes to add more peace time decisions to fill in those quiet moments when you are planning your next big push for power.

AND MORE, INCLUDING:
New ways to suppress rebellion, the monsoon season, new uses for colonists in non-colonial development, scornful insults, multiplayer teams, new art, and a host of new achievements.

Where can I buy a Europa Universalis 4: Dharma Key?

With GameGator, you are able to compare 17 deals across verified and trusted stores to find the cheapest Europa Universalis 4: Dharma Key for a fair price. All stores currently listed have to undergo very specific testing to ensure that customer support, game deliveries, and the game keys themselves are of the highest quality. To sweeten the deal, we offer you specific discount codes, which you will not be able to find anywhere else. This allows us to beat all competitor prices and provide you with the cheapest, most trustworthy deals. If the current cheapest price of $3.80 for Europa Universalis 4: Dharma is too high, create a price alert and we will alert you through email, SMS, or discord the moment the Europa Universalis 4: Dharma price matches your budget.

Can I play Europa Universalis 4: Dharma immediately after the purchase?

What store should I choose for the best Europa Universalis 4: Dharma Deal?