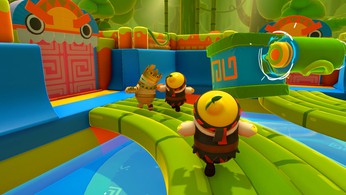 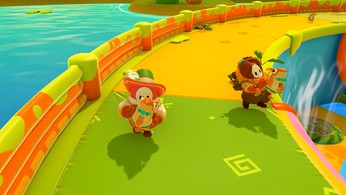 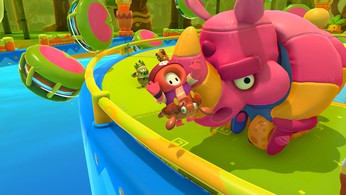 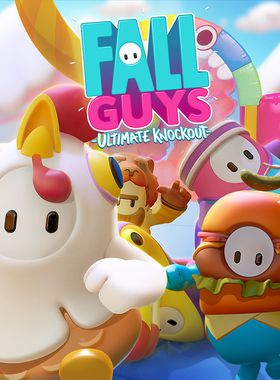 Take the Battle Royal genre, remove the weapons, get inspired by BattleRoyal TV shows like Takeshi's Castle and WipeOut instead, and combine it with the cuteness factor of the Minions, and you've got the simple but ingenious concept of Fall Guys: Ultimate Knockout.

Join a battle that escalates chaotically round after round with up to 60 players online. Fall Guys: Ultimate Knockout unleashes hordes of participants. Fight against bizarre obstacles, push your way through unwelcome competitors and overcome the merciless laws of physics on your way to true greatness. Surrender your dignity at the door and prepare for many defeats before you can claim the crown. The idea is that the contestants are eliminated in successive rounds until there is only on survivor left. And of course, foul play is allowed. All this is seasoned with the possibility of disguising our long-suffering participants with elegant pigeon suits, Mexican hats, pirate, or dinosaur costumes. Combined with exaggerated physics, which make moving more difficult, but also much more fun.

The game characters play a large part in the constant fun of the game. They are basically, a colourful blob with arms and legs, called Beans - or simply Fall Guys. With all their slapstick animations, cute noises, and funny costumes, the characters are designed to make you laugh. Especially when you're in a group with up to four friends and make fun of each other's failures. The colour, pattern, and face of your personal character can be changed. The cosmetic options are earned through advancement in a seasonal progression system and can also be purchased in an in-game shop. For the latter, you will need one of the two currencies Kudos and Crowns. Kudos are available after every game, depending on how far you have come. Crowns, however, are mainly earned by winning, while Kudos can also be bought with real money.

Where can I buy a Fall Guys: Ultimate Knockout Key?

With GameGator, you are able to compare 34 deals across verified and trusted stores to find the cheapest Fall Guys: Ultimate Knockout Key for a fair price. All stores currently listed have to undergo very specific testing to ensure that customer support, game deliveries, and the game keys themselves are of the highest quality. To sweeten the deal, we offer you specific discount codes, which you will not be able to find anywhere else. This allows us to beat all competitor prices and provide you with the cheapest, most trustworthy deals. If the current cheapest price of $5.54 for Fall Guys: Ultimate Knockout is too high, create a price alert and we will alert you through email, SMS, or discord the moment the Fall Guys: Ultimate Knockout price matches your budget.

Can I play Fall Guys: Ultimate Knockout immediately after the purchase?

What store should I choose for the best Fall Guys: Ultimate Knockout Deal?