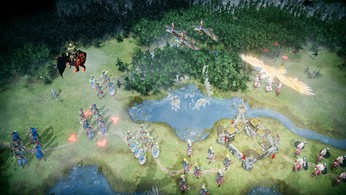 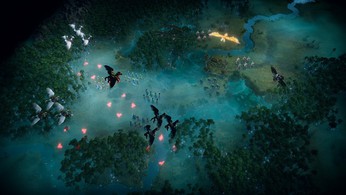 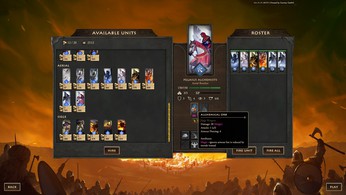 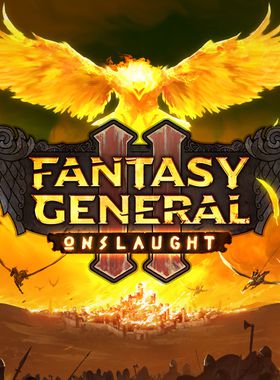 Armoured Giant Eagles roar in the sky and nosedive into enemy lines, while flying Night Mares spell doom for their targets down below. A Firebird screams high in the clouds, and a Pegasus-riding Transmuter flings his magical potions at the enemy. In the war for Keldonia, the sky has become a battlefield.

Death comes from above in the new expansion for Fantasy General II, Onslaught! 13 new aerial units are introduced, greatly expanding the original roster and allowing for daring new tactics and manoeuvres. Eagle Bombers, Firebirds, Pegasus Flamers, Monster Hunters, and more: you'll have no shortage of options.

Deploy these units in the brand-new Onslaught campaign, where a strange dream leads you to hunt for the mysterious Book of Krell. The campaign has over 30 procedurally generated maps, from the abandoned castle of King Dragga to the Lizard infested shores of Eastern Keldonia, until you must finally face The Unspeakable. Choose your General from one of several heroes, each with different skills, armies and advantages, pick your rewards for winning maps and evolve your strategies: the campaign provides endless replayability. Combined with the new Iron Maiden mode, Onslaught offers the ultimate Fantasy General II challenge.

Where can I buy a Fantasy General 2: Onslaught Key?

With GameGator, you are able to compare 11 deals across verified and trusted stores to find the cheapest Fantasy General 2: Onslaught Key for a fair price. All stores currently listed have to undergo very specific testing to ensure that customer support, game deliveries, and the game keys themselves are of the highest quality. To sweeten the deal, we offer you specific discount codes, which you will not be able to find anywhere else. This allows us to beat all competitor prices and provide you with the cheapest, most trustworthy deals. If the current cheapest price of $8.39 for Fantasy General 2: Onslaught is too high, create a price alert and we will alert you through email, SMS, or discord the moment the Fantasy General 2: Onslaught price matches your budget.

Can I play Fantasy General 2: Onslaught immediately after the purchase?

What store should I choose for the best Fantasy General 2: Onslaught Deal?