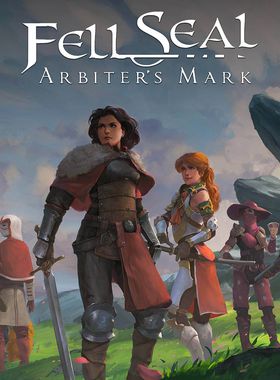 Fell Seal: Arbiter's Mark is a story-driven, turn-based tactical RPG set in a fantasy world with a touch of steampunk. Take control of the Arbiter Kyrie, an agent of the Immortal Council tasked with preserving stability and order throughout the land, and lead your troops through difficult encounters.

Experience an epic and mature story, unfolding through over 40 story encounters and topped with challenging end-game content. Classic tactical combat battles, with rugged terrain and elevation, taking place on beautiful hand-drawn environments. A deep and complex class system with over 30 classes and 300 abilities lets you truly customize every one of your characters through the selection of their class, sub-class and passives. Carefully craft the character you envision, be it a versatile generalist, a dedicated spell-caster or a mighty foe-crushing specialist! Customize your troops' appearance your way, by selecting their portrait, outfit, colors and overall visuals from a wide selection. Equip your army with over 240 pieces of equipment, either purchased, gathered from fallen enemies or created from crafting.

Centuries ago, a brutal beast of destruction rent the world asunder. In this time of need, the first Immortals came into their uncanny powers, powers so great that they succeeded in destroying the beast ravaging the land, where all else had failed.

Where can I buy a Fell Seal: Arbiter's Mark includes Bonus Key?

With GameGator, you are able to compare 2 deals across verified and trusted stores to find the cheapest Fell Seal: Arbiter's Mark Key for a fair price. All stores currently listed have to undergo very specific testing to ensure that customer support, game deliveries, and the game keys themselves are of the highest quality. To sweeten the deal, we offer you specific discount codes, which you will not be able to find anywhere else. This allows us to beat all competitor prices and provide you with the cheapest, most trustworthy deals. If the current cheapest price of $38.68 for Fell Seal: Arbiter's Mark is too high, create a price alert and we will alert you through email, SMS, or discord the moment the Fell Seal: Arbiter's Mark price matches your budget.

Can I play Fell Seal: Arbiter's Mark includes Bonus immediately after the purchase?

What store should I choose for the best Fell Seal: Arbiter's Mark includes Bonus Deal?

There are many details that you might want to go through before settling on the deal of your choosing. If you are looking for a special Edition, such as Deluxe Edition or Early Access, you can select these in our menu. When it comes to the actual stores, we made sure that you will never get overcharged/neglected. As we care about your satisfaction, we like to ensure that all deals are legitimate, reliable, and foolproof. On top of that, we make sure all stores affiliated with us have proper refund processes and guarantees and are backed by a competent team to ensure that absolutely nothing will go wrong.