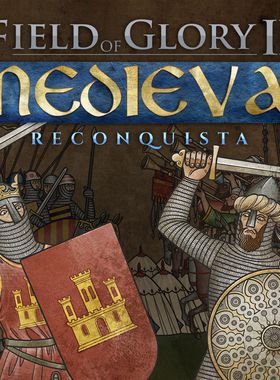 About Field of Glory 2: Medieval - Reconquista

Feudalism did not have such a dominant impact in Spain and Italy as it had in North West Europe. Both these lands had unique factors which affected the conduct of warfare.

In 1050, more than half of the Iberian peninsula was under the rule of Islamic states, an area known as Andalusia. After the demise of the Umayyad Caliphate in 1031, Andalusia was divided into several small Muslim states, known as the Taifa emirates. The Taifas often fought amongst themselves, leaving them unable to match the larger Christian Kingdom of Castile that was created in 1037 with the absorption of the Kingdom of Leon.

This was the true start of the Christian Reconquista that would not be completed until 1492. To help stem the Christian onslaught, in 1086 the Taifa Emir of Seville invited the Murabit Berbers of North Africa to enter Spain. This did not work as planned for the Taifas, for after defeating the Castilians at the Battle of Sagrajas, the Murabits quickly incorporated most of the Taifa emirates into their empire.

The Murabit empire was taken over in 1147 by a rival Berber sect, the Almohads. These events were a severe setback for the Spanish Christian kingdoms, but they recovered to win a great victory over the Almohads at Las Navas De Tolosa in 1212, which broke the power of the Muslims in Spain forever. Soon only the emirate of Granada was left, but as a vassal of Castile. Throughout the period there was also frequent fighting between states of the same religion, and Muslim and Christian warriors often had few qualms about serving princes of a different religion.

In Northern Italy the big cities had always tried to maintain a degree of independence, and often fought vigorously against the attempts of the Holy Roman Emperor to enforce his authority over them. They grew increasingly wealthy on trade, and by the end of the 11th century their city militias had become the mainstay of Italian armies, eclipsing the role of the feudal knights. In 1176 the northern Italian cities formed the Lombard League, and won a great victory over Emperor Frederick I Barbarossa at the Battle of Legnano.

Where can I buy a Field of Glory 2: Medieval - Reconquista Key?

With GameGator, you are able to compare 8 deals across 8 verified and trusted stores to find the cheapest Field of Glory 2: Medieval - Reconquista Key for a fair price. All stores currently listed have to undergo very specific testing to ensure that customer support, game deliveries, and the game keys themselves are of the highest quality. To sweeten the deal, we offer you specific discount codes, which you will not be able to find anywhere else. This allows us to beat all competitor prices and provide you with the cheapest, most trustworthy deals. If the current cheapest price of $11.99 for Field of Glory 2: Medieval - Reconquista is too high, create a price alert and we will alert you through email, SMS, or discord the moment the Field of Glory 2: Medieval - Reconquista price matches your budget.

Can I play Field of Glory 2: Medieval - Reconquista immediately after the purchase?

What store should I choose for the best Field of Glory 2: Medieval - Reconquista Deal?