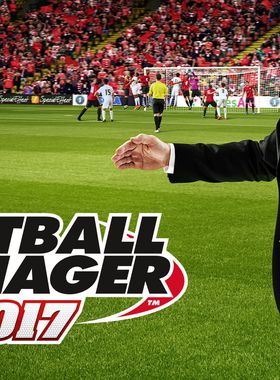 Take control of your favourite football team in Football Manager 2017, the most realistic and immersive football management game to date. It's the closest thing to doing the job for real!

With over 2,500 real clubs to manage and over 500,000 real footballers and staff to sign, Football Manager 2017 elevates you into a living, breathing world of football management with you at the centre.

You'll have full control of transfers and decide who plays, and who sits on the bench. Youre in complete control of tactics, team-talks and pitch-side instructions, and you'll follow the match live with our acclaimed 3D match engine. You'll also deal with real football media, solve player-happiness problems and the board will watch your every move.

Fans who pre-purchase Football Manager 2017 on Steam will be rewarded with Football Manager Touch 2017 for free (on PC, Mac or Linux) and, as a thank you for pre-purchasing, you'll also get a range of free downloadable content for Touch including “Board override”, “No firing”, “All job applications”, “National management” and 3 brand new challenges to play in the “Challenge” game mode. Touch is the more streamlined, ‘transfers and tactics' way to manage and can be purchased separately as a standalone game.

In addition you'll also enjoy access to a fully-playable Beta version of the game, which will be available roughly two weeks prior to the official release date. Single player careers started in this Beta version will continue in the full game.

Loyal fans of the series can enjoy an exclusive Steam-only discount of five per cent off for every Football Manager game they own (PC, Mac or Linux) dating back to Football Manager 2013. This means there's a maximum 20 per cent discount available to fans who own all of the last four versions.

Where can I buy a Football Manager 2017 Key?

With GameGator, you are able to compare 19 deals across verified and trusted stores to find the cheapest Football Manager 2017 Key for a fair price. All stores currently listed have to undergo very specific testing to ensure that customer support, game deliveries, and the game keys themselves are of the highest quality. To sweeten the deal, we offer you specific discount codes, which you will not be able to find anywhere else. This allows us to beat all competitor prices and provide you with the cheapest, most trustworthy deals. If the current cheapest price of $27.15 for Football Manager 2017 is too high, create a price alert and we will alert you through email, SMS, or discord the moment the Football Manager 2017 price matches your budget.

Can I play Football Manager 2017 immediately after the purchase?

What store should I choose for the best Football Manager 2017 Deal?

There are many details that you might want to go through before settling on the deal of your choosing. If you are looking for a special Edition, such as includes Bonus or Limited Edition, you can select these in our menu. When it comes to the actual stores, we made sure that you will never get overcharged/neglected. As we care about your satisfaction, we like to ensure that all deals are legitimate, reliable, and foolproof. On top of that, we make sure all stores affiliated with us have proper refund processes and guarantees and are backed by a competent team to ensure that absolutely nothing will go wrong.