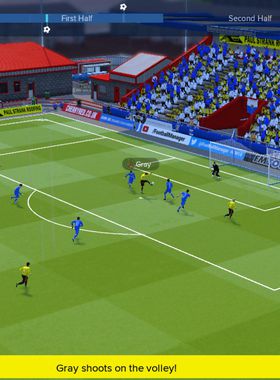 The football manager has often been praised in the past for his depth and realism. The 2019 version continues this tradition successfully and very motivatingly and above all improves the entry into the game as well as the accessibility to training and tactics. Both players after work and national coaches get their money's worth: the former can run the game semi-automatically, the latter get the absolute maximum out of their team through perfectly devised training and tactics directly tailored to the opponent.

The behaviour of the players on the pitch is often astonishingly similar to their real role models. If there were now a current graphic and perhaps even the possibility to expand the stadium and the club grounds, the football manager would come pretty close to a perfect manager simulation. If EA's last version of her soccer manager still had a flush of anger on my face, I'm now looking forward to every game with Football Manager 2019. That's what a football manager has to be like!

Where can I buy a Football Manager Touch 2018 Key?

With GameGator, you are able to compare 2 deals across verified and trusted stores to find the cheapest Football Manager Touch 2018 Key for a fair price. All stores currently listed have to undergo very specific testing to ensure that customer support, game deliveries, and the game keys themselves are of the highest quality. To sweeten the deal, we offer you specific discount codes, which you will not be able to find anywhere else. This allows us to beat all competitor prices and provide you with the cheapest, most trustworthy deals. If the current cheapest price of $73.85 for Football Manager Touch 2018 is too high, create a price alert and we will alert you through email, SMS, or discord the moment the Football Manager Touch 2018 price matches your budget.

Can I play Football Manager Touch 2018 immediately after the purchase?

What store should I choose for the best Football Manager Touch 2018 Deal?