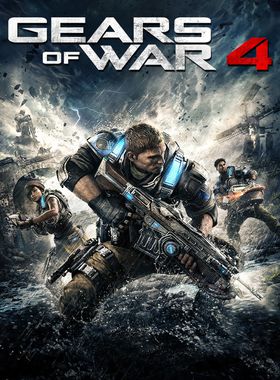 About Gears of War 4

Gears of War 4 is a third-person shooter developed by The Coalition and released by Microsoft Studios. It is the fourth main part of the Gears of War franchise and the first part not to be developed by Epic Games itself. While many elements have been taken over form its previous titles, Gears 4 features new weapons and gameplay mechanics. Players can push enemies away with their shoulders, while opponents can also pull players out of cover and use abilities. The game has four different categories of weather: from strong breezes to destructive category 3 storms that can affect the use of weapons and equipment. After narrowly escaping an attack on their village, JD Fenix and his friends, Kait and Del, must rescue the ones they love and discover the source of a monstrous new enemy.

Where can I buy a Gears of War 4 Key?

With GameGator, you are able to compare 19 deals across verified and trusted stores to find the cheapest Gears of War 4 Key for a fair price. All stores currently listed have to undergo very specific testing to ensure that customer support, game deliveries, and the game keys themselves are of the highest quality. To sweeten the deal, we offer you specific discount codes, which you will not be able to find anywhere else. This allows us to beat all competitor prices and provide you with the cheapest, most trustworthy deals. If the current cheapest price of $4.32 for Gears of War 4 is too high, create a price alert and we will alert you through email, SMS, or discord the moment the Gears of War 4 price matches your budget.

Can I play Gears of War 4 immediately after the purchase?

What store should I choose for the best Gears of War 4 Deal?