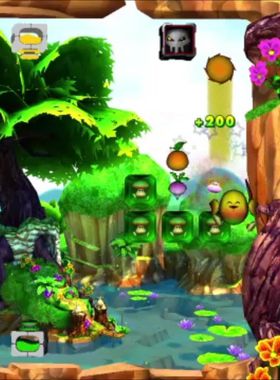 Long ago, the Earth was devastated by a fearsome creature. The scientist IMBU and his henchmen robbed the Earth of all its energy and trapped its peaceful inhabitants in sparkling gemstones. Miraculously, three heroes escaped: BAU, BAM and BOM. They became the Gem Smashers – with impressive leaps and quick spins, they skillfully smash the colourful crystals to free their friends.

Help them on this exciting adventure!

- Choose between three playable characters, each with different characteristics in terms of speed, jump and style

- Story Mode with over 100 levels across eight different worlds

- Challenge your friends in the Battle Mode

Where can I buy a Gem Smashers Key?

With GameGator, you are able to compare 4 deals across verified and trusted stores to find the cheapest Gem Smashers Key for a fair price. All stores currently listed have to undergo very specific testing to ensure that customer support, game deliveries, and the game keys themselves are of the highest quality. To sweeten the deal, we offer you specific discount codes, which you will not be able to find anywhere else. This allows us to beat all competitor prices and provide you with the cheapest, most trustworthy deals. If the current cheapest price of $2.97 for Gem Smashers is too high, create a price alert and we will alert you through email, SMS, or discord the moment the Gem Smashers price matches your budget.

Can I play Gem Smashers immediately after the purchase?

What store should I choose for the best Gem Smashers Deal?