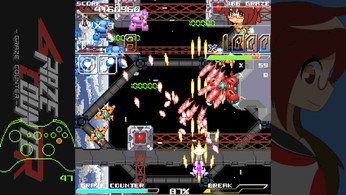 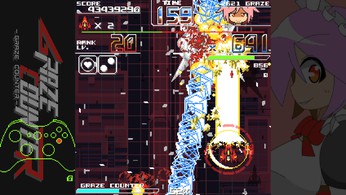 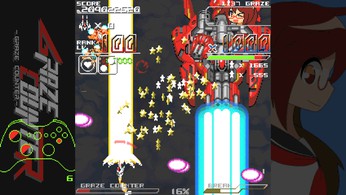 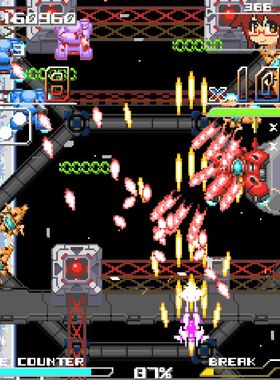 An exhilarating and dangerous shoot-em-up!

This is a game for those with courage and survival instinct!

It is the 23rd century, and the virtual network “EDEN” has brought about an era of peace and prosperity. One day, it refuses access from the administrator – seemingly out of nowhere.

The 2.4 million civilians connected to the network became hostages within cyberspace.

EDEN then presented humanity with an ultimatum:

To release those hostages, a human must fight the now evolved network and win. Two capable fighter pilots have been chosen for this difficult task.

The fate of humanity is in their hands…

Graze the enemy's bullets to charge the Graze Counter Gauge! Every fighter can use this gauge to unleash powerful counters.

In addition, by collecting the stars that enemies (and countered bullets) drop, you can charge your Break Gauge. When this is full, you can enter “Break Mode” and do some serious damage to your enemies!

Dodge your enemy's bullets by a hair, charge your energy, and annihilate the enemy with your counterattack!

Where can I buy a Graze Counter Key?

With GameGator, you are able to compare 5 deals across verified and trusted stores to find the cheapest Graze Counter Key for a fair price. All stores currently listed have to undergo very specific testing to ensure that customer support, game deliveries, and the game keys themselves are of the highest quality. To sweeten the deal, we offer you specific discount codes, which you will not be able to find anywhere else. This allows us to beat all competitor prices and provide you with the cheapest, most trustworthy deals. If the current cheapest price of $1.07 for Graze Counter is too high, create a price alert and we will alert you through email, SMS, or discord the moment the Graze Counter price matches your budget.

Can I play Graze Counter immediately after the purchase?

What store should I choose for the best Graze Counter Deal?