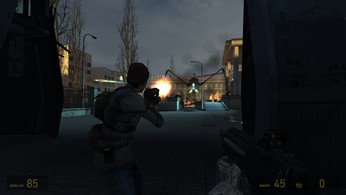 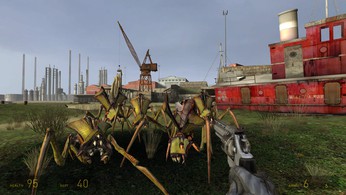 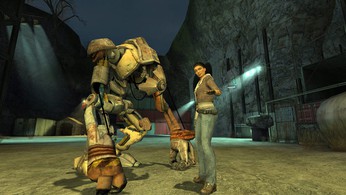 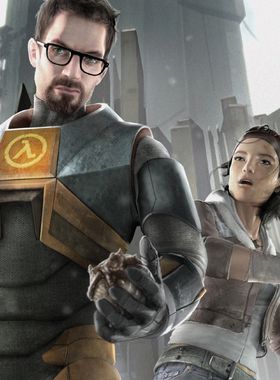 "The right man in the wrong place can make a difference in this world." - With this saying in mind at the beginning of the movie-like first-person shooter adventure, Gordon Freeman once again tackles aliens and other more or less fictional creatures. In the sequel to the first part of the game series, the adventure begins on a subway train. In the course of the story, the player is confronted with a dark and cold big city scenery, in which the inhabitants wear normal clothes and have been brainwashed. There are policemen everywhere, who are not very fussy about keeping order. Surveillance cameras accompany every step of the residents. Arbitrary interrogations and the disappearance of people for no apparent reason seem to be part of everyday life. Food is available on a ration card, and instinct is considered a human trait to be exterminated.

In contrast, billboards praise the benefits of living in this surveillance world. So-called "patrons" rule and control the city from a hermetically sealed citadel with the help of a sophisticated and omnipresent surveillance system. They aim to lead people to immortality by overcoming superstition and irrational impulses. Behind this cryptic message lies the insidious plan of extraterrestrial powers that seek to enslave humanity.

It is the task of the player or freeman to oppose these plans. He is supported by a resistance group, which provides the virtual hero with information, equipment, and weapons such as pistols, magnums, shotguns, rocket launchers, and crossbows. With these, you fire yourself through numerous, atmospherically dense levels, whereby the player shapes his actions, as is customary in the genre, from the first-person perspective. Among other things, security forces, mutants, aliens, and obscure parasites that attach themselves to people's heads must be dealt with. In these combat situations, only the responsive use of firearms can help. And as usual, enemies leave behind ammunition and medic packs that need to be picked up. The hit simulation is staged. Hit enemies are hurled through the air, red clouds mark their injuries, and, if certain weapons are used, body parts can also be severed.

Those who rely only on reaction speed and force of arms will fail in the long run. It is equally important to explore the landscape, to get into a conversation with people, to collect information, and solve puzzles. In these action phases, it becomes clear that "Half-Life 2" actually offers a thrilling, varied, and also challenging game story, which doesn't need such exaggeratedly depicted fight and slaughter scenes.

Where can I buy a Half-Life 2 Key?

With GameGator, you are able to compare 19 deals across verified and trusted stores to find the cheapest Half-Life 2 Key for a fair price. All stores currently listed have to undergo very specific testing to ensure that customer support, game deliveries, and the game keys themselves are of the highest quality. To sweeten the deal, we offer you specific discount codes, which you will not be able to find anywhere else. This allows us to beat all competitor prices and provide you with the cheapest, most trustworthy deals. If the current cheapest price of $3.25 for Half-Life 2 is too high, create a price alert and we will alert you through email, SMS, or discord the moment the Half-Life 2 price matches your budget.

Can I play Half-Life 2 immediately after the purchase?

What store should I choose for the best Half-Life 2 Deal?

There are many details that you might want to go through before settling on the deal of your choosing. If you are looking for a special Edition, such as Episode 1 or Episode 2, you can select these in our menu. When it comes to the actual stores, we made sure that you will never get overcharged/neglected. As we care about your satisfaction, we like to ensure that all deals are legitimate, reliable, and foolproof. On top of that, we make sure all stores affiliated with us have proper refund processes and guarantees and are backed by a competent team to ensure that absolutely nothing will go wrong.