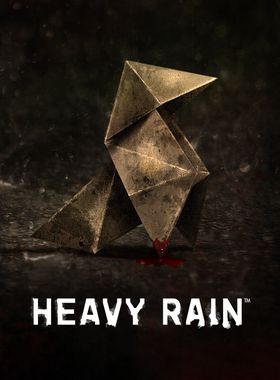 From the film "Forrest Gump" (1994), we know that there are different types of rain: "Rain with small crackling drops, rain with nice thick drops, the rain that comes from the side and rain that seems to come from below". In the adventure "Heavy Rain", long-awaited by the gaming community, the mentioned rain with the sweet thick drops plays a supporting, but unfortunately also an ominous and pregnant with the meaning role. The (heavy) rain serves in the game as a symbol of the heavy burden of guilt that can lie on a human being. The loss of his child caused this unbearable guilt. The heavy drops rain down on Nathan Mars, a former architect. But instead of ritual cleansing of his heavy soul, the rain reminds Nathan drop by drop of his complicity in the death of his son Jason, of his subsequent broken marriage, of the end of his career as an architect, of the, tearing out of his showpiece life with a beautiful wife, a great house and two wonderful sons. One almost feels reminded of the story in the Bible when the pious Job is tested equally hard by God and Satan. And when nothing worse could happen to a person, fate plays another bitterly evil game with Nathan Mars. The second son Sean becomes the victim of a serial killer who kidnaps children and drowns them in a pit due to the continuous heavy rain. The so-called Origami Killer, however, also seems to have read the Bible and tries to outdo Job's story. He contacts Nathan Mars and asks him to pass five perfidious tests, which are supposed to give a clue to the hiding place of his son. It almost seems as if the origami killer is staging a Greek tragedy in five acts and is conducting a kind of psychological experiment that wants to have the question answered: "How far would you go to save the life of a loved one?

Where can I buy a Heavy Rain Key?

With GameGator, you are able to compare 36 deals across 17 verified and trusted stores to find the cheapest Heavy Rain Key for a fair price. All stores currently listed have to undergo very specific testing to ensure that customer support, game deliveries, and the game keys themselves are of the highest quality. To sweeten the deal, we offer you 6 specific discount codes, which you will not be able to find anywhere else. This allows us to beat all competitor prices and provide you with the cheapest, most trustworthy deals. If the current cheapest price of $5.03 for Heavy Rain is too high, create a price alert and we will alert you through email, SMS, or discord the moment the Heavy Rain price matches your budget.

Can I play Heavy Rain immediately after the purchase?

What store should I choose for the best Heavy Rain Deal?