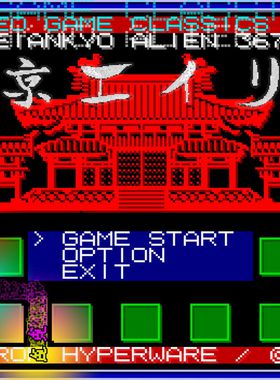 This software is a compilation that includes the arcade version of Heiankyo Alien which was a big hit in 1980, and two other arranged versions.

Contents of the compilation are as follows.

It is a ported version of the original arcade version of Heiankyo Alien.

This is the first arranged version of Heiankyo alien which added a significant change in the gameplay. You have infinite lives before time runs out, as this game is 5 minute long score attack (With up to 90 seconds time extention depending on the items you dig).

By killing a certain number of aliens earn items that give you advantages. There is also a diamond buried somewhere in the field which doubles the score. On top of that, recover all buried items for special bonus.

In addition to explosive score growth and psychedelic graphics, game effects reflect game development and give you different sense of exhilaration.

The arcade version was more of a game to "defend", but this version has more emphasis on "attack".

Music is composed by Wing☆, who admires Yuzo Koshiro as his master, and Ibojima, a Swedish Techno/Trance unit. Gorgeous music will produce the sense of exhilaration in game play.

In Heiankyo Alien 3671, I implemented a feature that existed in TK-80BS version, but not in the arcade due to hardware limitations. Later a bug was discovered that will let you score explosively. This bug was fixed and 3671 was released, but since this bug has no other negative effect other than scoring, I decided to include this bug as part of the specification to make it as a separate version.

A Collaboration version with Guildoll, "2.5 dimension figure idols who want to be loved", a goal is set at each level for you to advance. With a theme song, each member of the group has a different scenario and the game play is also completely differently arranged from "Heiankyo Alien 3671".

In the following update, there will be five members at the end. (Every member will have a different scenario / mission.) This version is planned to implement the full voice acting of each member.

With GameGator, you are able to compare deals across verified and trusted stores to find the cheapest Heiankyo Alien 3671 Key for a fair price. All stores currently listed have to undergo very specific testing to ensure that customer support, game deliveries, and the game keys themselves are of the highest quality. To sweeten the deal, we offer you specific discount codes, which you will not be able to find anywhere else. This allows us to beat all competitor prices and provide you with the cheapest, most trustworthy deals. If the current cheapest price for Heiankyo Alien 3671 is too high, create a price alert and we will alert you through email, SMS, or discord the moment the Heiankyo Alien 3671 price matches your budget.

Can I play Heiankyo Alien 3671 immediately after the purchase?

What store should I choose for the best Heiankyo Alien 3671 Deal?