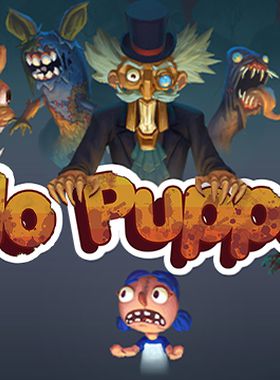 "HELLO PUPPETS!" is a horror-comedy adventure that turns your hand into a living, talking puppet named Scout. Years ago, a bad Sesame Street knock-off called "Mortimer's Handeemen" was canceled and forgotten, but the puppets from the show have come to life, they're pure evil, and they have plans for you. Your only chance of escape is the somewhat-less-evil Scout. Work with Scout to escape the evil Handeemen puppets before it's too late!

In 1986, a fire destroyed the studio where "Mortimer's Handeemen," a failing children's show starring hand puppets, was filmed. Eight people died, including the show's creator. Ever since, rumors have swirled that the burnt-out shell of a warehouse was haunted. You play as a college reporter who broke in to see if the rumors were true. You're about to get more than you bargained for.

"Hello Puppets!" is an immersive VR horror game with a twist: stuck on one of your hands is a sarcastic, foul-mouthed sentient puppet named Scout. Scout isn't your usual companion character: she doesn't like you and you don't like her, but you'll have to work together to escape the evil cast of "Mortimer's Handeemen," brought to life by a magical spell gone wrong. You're on the run from psychotic puppets, and your only friend is a puppet who is, by her own account, "slightly less evil."

Where can I buy a Hello Puppets! Key?

With GameGator, you are able to compare 2 deals across verified and trusted stores to find the cheapest Hello Puppets! Key for a fair price. All stores currently listed have to undergo very specific testing to ensure that customer support, game deliveries, and the game keys themselves are of the highest quality. To sweeten the deal, we offer you specific discount codes, which you will not be able to find anywhere else. This allows us to beat all competitor prices and provide you with the cheapest, most trustworthy deals. If the current cheapest price of $2.66 for Hello Puppets! is too high, create a price alert and we will alert you through email, SMS, or discord the moment the Hello Puppets! price matches your budget.

Can I play Hello Puppets! immediately after the purchase?

What store should I choose for the best Hello Puppets! Deal?