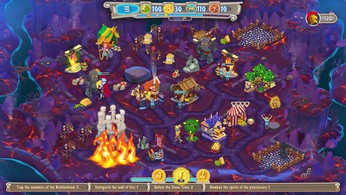 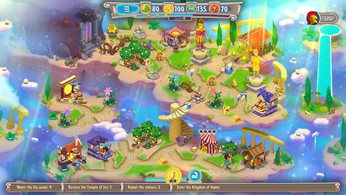 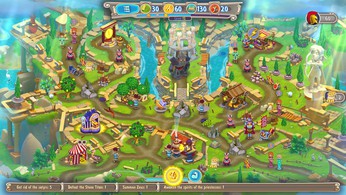 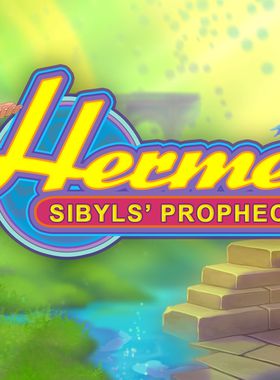 Fight to save to the gods as they battle to retain their immortality! According to the yellowed pages of an ancient prophecy, the Olympian gods are destined to someday lose their immortality. When foreboding signs suggesting the time has come begin to appear, the Greek god Hermes embarks on a quest to stop the prophecy and save himself and his fellow immortals.

Although Hermes is a clever and mischievous god, his fate actually rests in the hands of the player. As the unseen force in this fantastical world, the player must guide Hermes and his entourage as they battle an evil cult bent on claiming immortality for themselves, restore a devastated land and help the people who live there.

Each level involves a game of strategy and a race against time to produce resources, overcome obstacles and complete quests. But the player is not left without help. Bonuses abound and each god contributes a special ability to the cause. Filled with bizarre and fanciful creatures of legend, vivid graphics that pop off the screen and audio that wraps the player in a thrilling atmosphere of mythology, Hermes: Sibyls' Prophecy is an epic adventure and a perfect escape for the young and the ageless alike.

Where can I buy a Hermes: Sibyls' Prophecy Key?

With GameGator, you are able to compare 2 deals across verified and trusted stores to find the cheapest Hermes: Sibyls' Prophecy Key for a fair price. All stores currently listed have to undergo very specific testing to ensure that customer support, game deliveries, and the game keys themselves are of the highest quality. To sweeten the deal, we offer you specific discount codes, which you will not be able to find anywhere else. This allows us to beat all competitor prices and provide you with the cheapest, most trustworthy deals. If the current cheapest price of $1.96 for Hermes: Sibyls' Prophecy is too high, create a price alert and we will alert you through email, SMS, or discord the moment the Hermes: Sibyls' Prophecy price matches your budget.

Can I play Hermes: Sibyls' Prophecy immediately after the purchase?

What store should I choose for the best Hermes: Sibyls' Prophecy Deal?