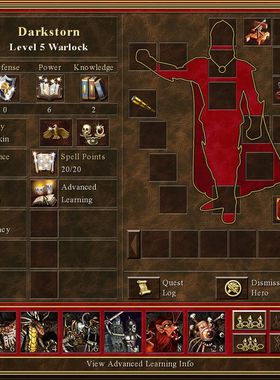 Do you remember all those sleepless nights spent fighting Black Dragons and Archangels, Demons and Necromancers? Were you a true fan of Heroes of Might & Magic III? We have great news for you!

The most popular Heroes title of all time is back in HD! Fifteen years later, rediscover the epic tale of Queen Catherine Ironfist, as she re-embarks on her critically acclaimed quest to unite her ravaged homeland and re-conquer the kingdom of Erathia.

Forge the destinies of mighty and magical heroes, leading fantastic and ferocious creatures in a game that still stands today as the landmark opus of the Might & Magic: Heroes' franchise.

Heroes of Might & Magic III is a turn-based strategy game, originally released in February 1999.

Where can I buy a Heroes of Might & Magic 3 Key?

With GameGator, you are able to compare deals across verified and trusted stores to find the cheapest Heroes of Might & Magic 3 Key for a fair price. All stores currently listed have to undergo very specific testing to ensure that customer support, game deliveries, and the game keys themselves are of the highest quality. To sweeten the deal, we offer you specific discount codes, which you will not be able to find anywhere else. This allows us to beat all competitor prices and provide you with the cheapest, most trustworthy deals. If the current cheapest price of $7.08 for Heroes of Might & Magic 3 is too high, create a price alert and we will alert you through email, SMS, or discord the moment the Heroes of Might & Magic 3 price matches your budget.

Can I play Heroes of Might & Magic 3 immediately after the purchase?

What store should I choose for the best Heroes of Might & Magic 3 Deal?