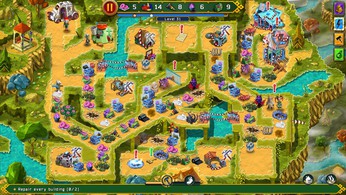 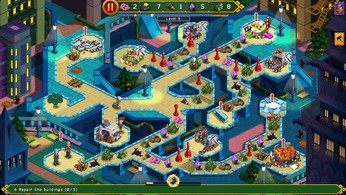 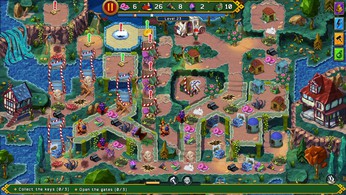 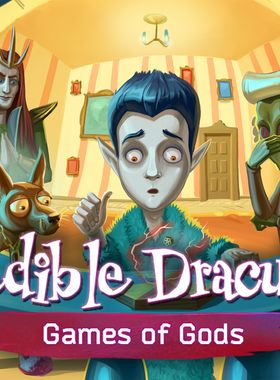 About Incredible Dracula 4: Games Of Gods

Outsmart a god in a thrilling showdown of wits and enjoy a lot of laughs along the way! Dracula has been on his share of adventures through the centuries but nothing like the quest the deceitful god Loki has thrown his way.

Bored to tears one day, Loki decides to trick a pair of immortals into playing a new game. Upon spotting Dracula and his zombie minion, Rufus, he tricks the eternally fanged one into rolling a pair of magical dice for a chance at winning an amazing prize.

With a single toss of the bones, Dracula and his servant are transported INTO Loki's game! To return to their former undead lives, they'll have to beat each level and overcome Loki's cunning schemes.

Escaping won't be easy but it is possible. Manage your time and resources well, build towers to defend your helpers, complete missions for outlandish characters and use bonuses to your advantage as you race against the clock to grab Loki's coin and teleport to the next level!

Featuring drop-dead gorgeous visuals, a story that will keep you in stitches and enough bonus materials to fill a good chunk of eternity, Incredible Dracula 4: Game of Gods will take you on a journey you'll never forget!

Where can I buy a Incredible Dracula 4: Games Of Gods Key?

With GameGator, you are able to compare 4 deals across verified and trusted stores to find the cheapest Incredible Dracula 4: Games Of Gods Key for a fair price. All stores currently listed have to undergo very specific testing to ensure that customer support, game deliveries, and the game keys themselves are of the highest quality. To sweeten the deal, we offer you specific discount codes, which you will not be able to find anywhere else. This allows us to beat all competitor prices and provide you with the cheapest, most trustworthy deals. If the current cheapest price of $1.40 for Incredible Dracula 4: Games Of Gods is too high, create a price alert and we will alert you through email, SMS, or discord the moment the Incredible Dracula 4: Games Of Gods price matches your budget.

Can I play Incredible Dracula 4: Games Of Gods immediately after the purchase?

What store should I choose for the best Incredible Dracula 4: Games Of Gods Deal?