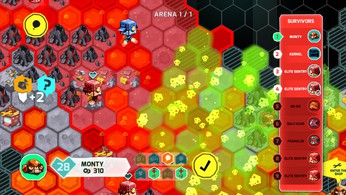 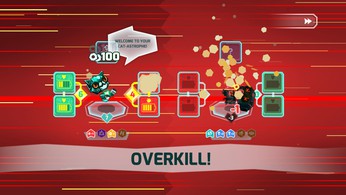 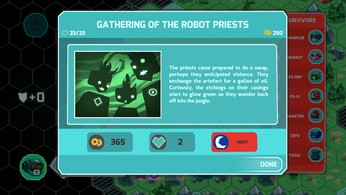 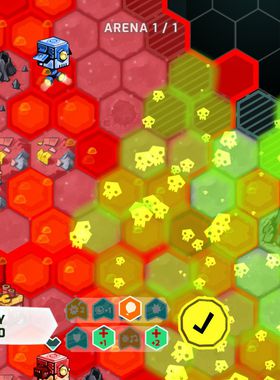 Master the 22 token battle deck and develop your strategies in super-accessible local two-player, online two-player, and single-player robotic skirmishes. Deploy HACKS and GLITCHES in the heat of battle. Use all your cunning to terminate the competition. Climb the leaderboards and conquer the robot world!

Battle with a collection of 46+ deliciously diverse robots in five hostile environments. Augment the devious droids as you go, to become increasingly formidable. Embark on an epic journey filled with peril and twists as a decaying robot dystopia reveals itself over eight replayable tournaments. Trade cutting, robotic insults as you fight. Obliterate the competition in relentless overkill!

* This is card battling HACKED with no costly expansions and time-consuming customisation
* Compete in intense local and online ranked 2P multiplayer battles
* Experience the epic 15+ hour single-player campaign
* Unlock 46 robots and find over 100 augments to boost their abilities
* Explore your tactical options to survive randomly generated survival arenas
* Master the 22 token battle deck and define your own style of play
* A compelling narrative with over 150 branching story events
* Explore five types of hazardous environment from lush jungles to barren Moonscapes
* Can you overthrow the megalomaniacal Kernel and save robotkind?

Where can I buy a Insane Robots Key?

With GameGator, you are able to compare 4 deals across verified and trusted stores to find the cheapest Insane Robots Key for a fair price. All stores currently listed have to undergo very specific testing to ensure that customer support, game deliveries, and the game keys themselves are of the highest quality. To sweeten the deal, we offer you specific discount codes, which you will not be able to find anywhere else. This allows us to beat all competitor prices and provide you with the cheapest, most trustworthy deals. If the current cheapest price of $19.99 for Insane Robots is too high, create a price alert and we will alert you through email, SMS, or discord the moment the Insane Robots price matches your budget.

Can I play Insane Robots immediately after the purchase?

What store should I choose for the best Insane Robots Deal?