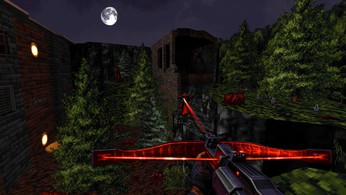 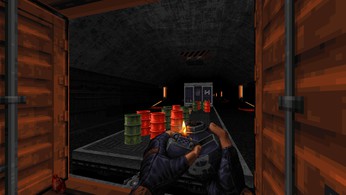 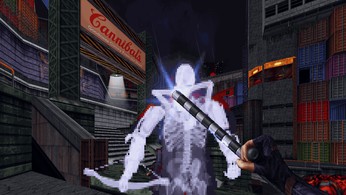 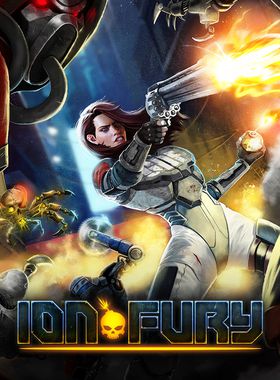 While Shelly "Bombshell" Harrison earned her codename defusing bombs for the Global Defense Force, when evil transhumanist mastermind Dr. Jadus Heskel unleashes the members of his cybernetic cult onto the streets of Neo DC, she knows it’s time to start causing explosions instead of preventing them.

Her quest to slay Heskel leaves a trail of carnage throughout huge, multi-path levels filled with gigantic explosions, more secret areas than we can count, and inhuman foes behind every corner. There’s no regenerating health here; stop taking cover and start running and gunning.

Shelly’s crusade to take down Heskel’s army will see her leave destruction in her wake with a wide arsenal of weapons, complete with alternate fire modes and different ammo types. Her signature revolver, the tri-barreled Loverboy, brings enemies pain and players pleasure with both single shots and Old West-style hammer fanning action. Who needs a regular shotgun when you can load buckshot into your grenade launcher? Violent, over-the-top Bowling Bombs rip enemies apart with ease.

Ion Fury laughs at the idea of mandatory checkpoints and straight paths through shooting galleries. But, just because this is a true old-school first-person shooter doesn’t mean we've ignored all the good new stuff the last two decades have brought. Headshots? Hell yeah. More physics and interactivity? You betcha. Widescreen, controller support, and Auto Saves? 3D Realms and Voidpoint have taken the best of both worlds and cooked it all into a bloody stew.

Where can I buy a Ion Fury Key?

With GameGator, you are able to compare 14 deals across verified and trusted stores to find the cheapest Ion Fury Key for a fair price. All stores currently listed have to undergo very specific testing to ensure that customer support, game deliveries, and the game keys themselves are of the highest quality. To sweeten the deal, we offer you specific discount codes, which you will not be able to find anywhere else. This allows us to beat all competitor prices and provide you with the cheapest, most trustworthy deals. If the current cheapest price of $4.97 for Ion Fury is too high, create a price alert and we will alert you through email, SMS, or discord the moment the Ion Fury price matches your budget.

Can I play Ion Fury immediately after the purchase?

What store should I choose for the best Ion Fury Deal?