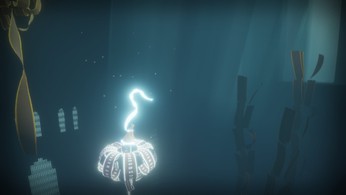 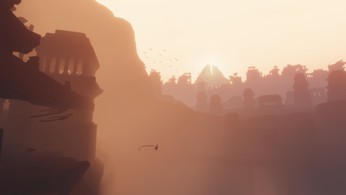 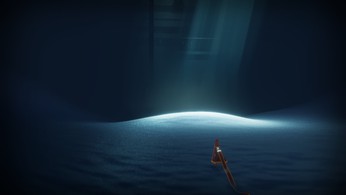 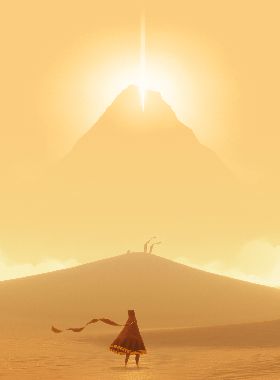 A veiled figure glides through the sun-drenched dunes of a seemingly endless desert. Along the way, she encounters the remains of a long lost civilization in the form of crumbling buildings and bridges. The supposed destination of the journey can hardly be overlooked: on the distant horizon, the silhouette of a vast mountain shines through the flickering air. A hill, majestic and threatening at the same time, which immediately allows comparison with the peak of fate from the "Lord of the Rings" saga. But instead of spitting fire, a ray of light rises from the mountain's interior towards the sky and shows the nameless figure the way. Attracted by the sun like a moth, we slowly move forward with the uncomfortable feeling that this might be our last journey.

This journey takes the figure and the player into the unknown and uncertain. Thus Journey conveys a particular form of uneasiness but also of curiosity. The endless desert, the play of light of the blazing sun and the stormy wind create a melancholically oppressive, but also in a certain way beautiful world, which should leave few gamers emotionally cold, similar to the masterpiece "Shadow of the Colossus". Without giving too much away, towards the end, the playing experience is even noticeably transferred into the physical. "Journey" takes the player on an uncertain but exciting journey and wraps it up in an easy-to-use and beautifully designed video game.

Where can I buy a Journey Key?

With GameGator, you are able to compare 18 deals across verified and trusted stores to find the cheapest Journey Key for a fair price. All stores currently listed have to undergo very specific testing to ensure that customer support, game deliveries, and the game keys themselves are of the highest quality. To sweeten the deal, we offer you specific discount codes, which you will not be able to find anywhere else. This allows us to beat all competitor prices and provide you with the cheapest, most trustworthy deals. If the current cheapest price of $5.31 for Journey is too high, create a price alert and we will alert you through email, SMS, or discord the moment the Journey price matches your budget.

Can I play Journey immediately after the purchase?

What store should I choose for the best Journey Deal?