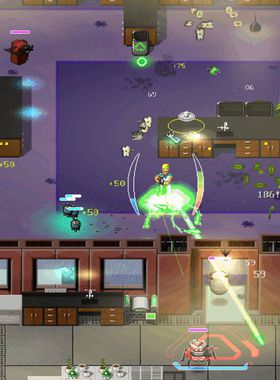 After the revolution, humanity's efforts to meld cold robotics and nature have paid off. Earth has revitalized itself – and now the global utopia once thought impossible has become a reality. This bio-mechanical paradise has emerged thanks in no small part to a steady disarmament campaign.

Yet even in times of absolute peace, shadowy secrets lurk. Several weapon research facilities remain operational; hidden from the public eye, they're kept alive as an ‘insurance policy' against unforeseen threats. Within these clandestine halls, scientists work tirelessly to design powerful combat systems never before imagined by humankind. When a security breach threatens one of these facilities (Arch City), you'll take control of the most advanced hardware ever developed: a Human-Operated Remote Droid prototype.

Elite pilots of the advanced H.O.R.D. chassis are tasked with blasting through endless squads of rebellious bots. These arent just your average Serve N Show bots either - Charge Bots, Slice Bots, Bouncing Betties, Crab Bots, and Hyper Turrets, to name a few. Surviving that maelstrom, well, no one has made it. Yet.

Where can I buy a Kite Key?

With GameGator, you are able to compare deals across verified and trusted stores to find the cheapest Kite Key for a fair price. All stores currently listed have to undergo very specific testing to ensure that customer support, game deliveries, and the game keys themselves are of the highest quality. To sweeten the deal, we offer you specific discount codes, which you will not be able to find anywhere else. This allows us to beat all competitor prices and provide you with the cheapest, most trustworthy deals. If the current cheapest price for Kite is too high, create a price alert and we will alert you through email, SMS, or discord the moment the Kite price matches your budget.

Can I play Kite immediately after the purchase?

What store should I choose for the best Kite Deal?