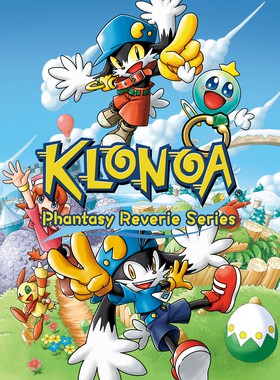 KLONOA is a 3D side-scrolling action game series whose first title was released by Namco in 1997. Set in a unique universe populated by a range of original characters, the game follows the hero, Klonoa, as he sets off on a journey to save the world.

Commemorating the 25th anniversary of the first title in the series, we are pleased to announce the release of the KLONOA Phantasy Reverie Series, a remastered title combining both KLONOA: Door to Phantomile and KLONOA 2: Lunatea's Veil!

The world of the games and their gameplay elements remains unchanged, while the graphics have been upgraded. Adjustable difficulty settings have also been introduced to make the games more accessible to first-time players.

Enjoy a nostalgic trip down memory lane playing this new and improved KLONOA.

Where can I buy a Klonoa Phantasy Reverie Series Key?

With GameGator, you are able to compare 17 deals across verified and trusted stores to find the cheapest Klonoa Phantasy Reverie Series Key for a fair price. All stores currently listed have to undergo very specific testing to ensure that customer support, game deliveries, and the game keys themselves are of the highest quality. To sweeten the deal, we offer you specific discount codes, which you will not be able to find anywhere else. This allows us to beat all competitor prices and provide you with the cheapest, most trustworthy deals. If the current cheapest price of $29.21 for Klonoa Phantasy Reverie Series is too high, create a price alert and we will alert you through email, SMS, or discord the moment the Klonoa Phantasy Reverie Series price matches your budget.

Can I play Klonoa Phantasy Reverie Series immediately after the purchase?

What store should I choose for the best Klonoa Phantasy Reverie Series Deal?