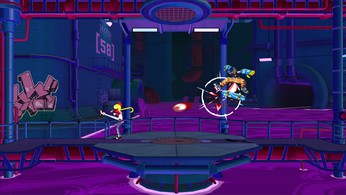 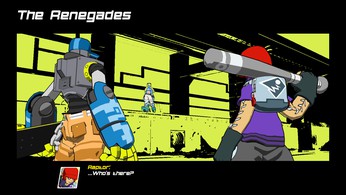 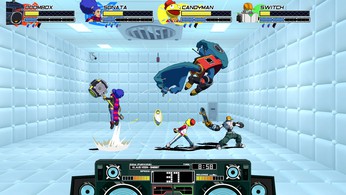 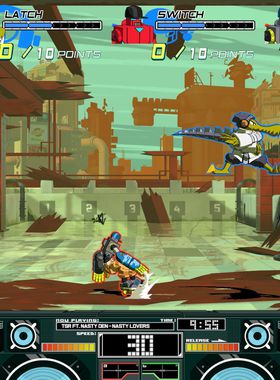 Lethal League Blaze is an intense, high speed ball game, with unique characters, outta sight sounds and none of that weak shit. In Shine City, the anti-gravity ball game has long been illegal. The group who kept playing was dubbed the Lethal League. Even now, with their sport pushed underground, players and crews compete in the League for challenge and respect.

In the game, the goal is to beat your opponents with the ball. You can manipulate the ball to get the perfect angle and use your characters special moves to surprise them. But every strike speeds up the ball or even doubles its speed, up to shatteringly extreme velocities. You can tag the ball to your color, but on those high speeds the tables are quickly turned. You can play locally with friends and foes, by yourself in the singleplayer modes or battle it out online!

Easy to pick up, hard to master gameplay: Start off simply hitting the ball faster and faster back and forth. Improve by learning how to use Smashes, Bunts and Special Abilities to your advantage. Then go further beyond with parries and countering with throws ending with the pure psychological goodness: taunts.

Tons of unlockable extras and secrets: Unlock characters and their outfits as you play. New modes and stages are in there too and even the soundtrack can be unlocked to play at leisure.

Play on your own: Step up to the plate by yourself and beat a series of opponents in the Arcade Mode to reach the beat-blasting bossfight. Then check out the event-based Story Mode that has you playing all sides of the going-downs in Shine City.

Modes and options:Pick your preferred style of play like with HP, one-shot kill or points. And then there are game modes like Strikers, using goals, and something called Lethal Volley...

Where can I buy a Lethal League Blaze Key?

With GameGator, you are able to compare 18 deals across verified and trusted stores to find the cheapest Lethal League Blaze Key for a fair price. All stores currently listed have to undergo very specific testing to ensure that customer support, game deliveries, and the game keys themselves are of the highest quality. To sweeten the deal, we offer you specific discount codes, which you will not be able to find anywhere else. This allows us to beat all competitor prices and provide you with the cheapest, most trustworthy deals. If the current cheapest price of $4.29 for Lethal League Blaze is too high, create a price alert and we will alert you through email, SMS, or discord the moment the Lethal League Blaze price matches your budget.

Can I play Lethal League Blaze immediately after the purchase?

What store should I choose for the best Lethal League Blaze Deal?