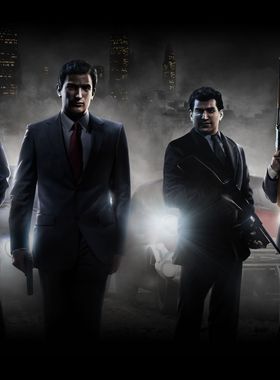 Physical labor does not pay. At least not in video games. The player quickly notices this, too, in the alter ego of Vito Scaletta, a World War II homecomer who is supposed to load a truck on the docks for a few lousy dollars. In reality, you could have been sure that you had broken your back after the job was done. But fortunately, it is a video game, and we can stop the tedious work and devote ourselves to more lucrative but also highly illegal tasks such as collecting protection money, stealing cars, selling contraband, carrying out robberies, disposing of corpses and taking on contract killings. Just everything you have to do is to rise from petty criminal to the hierarchy of the less honorable family of the Mafia. The missions in "Mafia 2" are divided into 15 chapters, whereby each mission contains several tasks, which combine driving, sneaking, and of course, partly wild shooting. Typical for the genre, the player starts as a small henchman for bad guys. The missions gradually become more complex and demanding. Especially after successfully executed crimes, the police patrols are on alert. The player can (unfortunately) ignore red lights. Still, at least the police officers react very sensitively to speeding offenses and can only be immobilized with a bribe or a lead foot, which is not so comfortable with the heavy and slow road cruisers. They can be coiffed in a garage. But it is better if the player activates the speed limiter and drives through the magnificent scenery of Emire Bay with pleasure. "Mafia 2" is a thrilling game, which especially scores points because of the exciting plot and the well-implemented atmosphere. The story around Vito Scaletta knows how to convince, even if it isn't told as cynically-satirical as the one by Nico Bellic from "GTA IV". While "GTA IV" buries the American dream from rags to riches, "Red Dead Redemption" demystifies the western mythology, Mafia 2 completely lacks critical components but is also far more severe in its plot. Either way, "Mafia 2" is pure adult entertainment.

Where can I buy a Mafia 2 Definitive Edition Key?

With GameGator, you are able to compare 35 deals across verified and trusted stores to find the cheapest Mafia 2 Key for a fair price. All stores currently listed have to undergo very specific testing to ensure that customer support, game deliveries, and the game keys themselves are of the highest quality. To sweeten the deal, we offer you specific discount codes, which you will not be able to find anywhere else. This allows us to beat all competitor prices and provide you with the cheapest, most trustworthy deals. If the current cheapest price of $3.75 for Mafia 2 is too high, create a price alert and we will alert you through email, SMS, or discord the moment the Mafia 2 price matches your budget.

Can I play Mafia 2 Definitive Edition immediately after the purchase?

What store should I choose for the best Mafia 2 Definitive Edition Deal?

There are many details that you might want to go through before settling on the deal of your choosing. If you are looking for a special Edition, such as Definitive Edition or Digital Deluxe Edition, you can select these in our menu. When it comes to the actual stores, we made sure that you will never get overcharged/neglected. As we care about your satisfaction, we like to ensure that all deals are legitimate, reliable, and foolproof. On top of that, we make sure all stores affiliated with us have proper refund processes and guarantees and are backed by a competent team to ensure that absolutely nothing will go wrong.