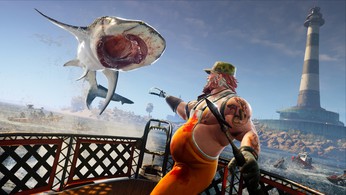 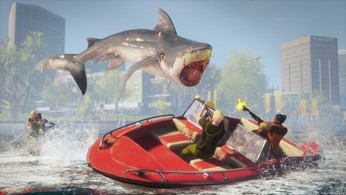 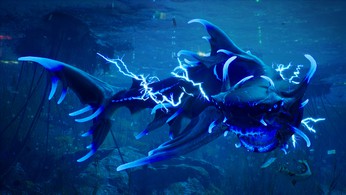 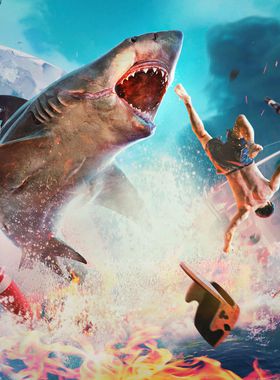 It's a beautiful day at the beach: Early in the morning, John and Michael pack their bags and head for Sapphire Bay with a bath towel, parasol, an inflatable swimming island and a frisbee. But as soon as the car is parked and the first steps onto the still slightly cool sand are taken, the two of them look into the yellow eyes of a monstrous tooth-guzzling shark, which shortly before has torn apart the other beach goers and colored the water blood red. Panic. Screaming people come running towards them, only to get eaten by the monster. It is a slaughter festival. And you have staged it.

In this single player action role-playing game, you must fight as a baby bull shark to survive. Explore different underwater environments, from swamps and rivers, to seaside resorts and the deep blue sea. The only tools you need are your mind, jaws, and the uncanny ability to evolve as you feed. Eat, explore, and develop the ultimate killing machine! Maneater is a role-playing game about a shark, where humour plays a very important part. If you enjoy word jokes, easter-eggs, and pop-cultural references, you will love to dip your feet into the water.

Once you have reached your first evolutionary stage, you may hunt humans for the first time. To do so, you sink pedal boats and grab the occupants or even throw yourself ashore to grab a few crispy brown tourists. If you cause a lot of panic, hunters will enter the game. This starts quite harmlessly with some amateurs on jets skis, but quickly turns into hunting boats and enemies with guns. If they target you, you will have to evade them to avoid being hit. Once you become a fully-grown shark, you can make short work of these creatures, until they upgrade to dynamite.

Where can I buy a Maneater Apex Edition Key?

With GameGator, you are able to compare 16 deals across verified and trusted stores to find the cheapest Maneater Key for a fair price. All stores currently listed have to undergo very specific testing to ensure that customer support, game deliveries, and the game keys themselves are of the highest quality. To sweeten the deal, we offer you specific discount codes, which you will not be able to find anywhere else. This allows us to beat all competitor prices and provide you with the cheapest, most trustworthy deals. If the current cheapest price of $11.61 for Maneater is too high, create a price alert and we will alert you through email, SMS, or discord the moment the Maneater price matches your budget.

Can I play Maneater Apex Edition immediately after the purchase?

What store should I choose for the best Maneater Apex Edition Deal?

There are many details that you might want to go through before settling on the deal of your choosing. If you are looking for a special Edition, such as Apex Edition or Day One Edition, you can select these in our menu. When it comes to the actual stores, we made sure that you will never get overcharged/neglected. As we care about your satisfaction, we like to ensure that all deals are legitimate, reliable, and foolproof. On top of that, we make sure all stores affiliated with us have proper refund processes and guarantees and are backed by a competent team to ensure that absolutely nothing will go wrong.