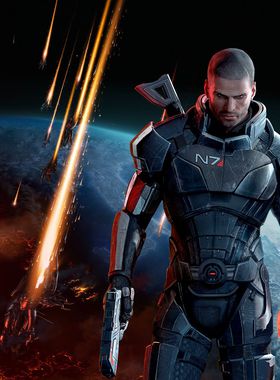 "Mass Effect" is one of the biggest role-playing game series in recent years. The exciting and twisty story about the crew of the spaceship "Normandy" has captivated many players for hours in front of the screen. The trilogy concludes with "Mass Effect 3", which effectively concludes the battle for the survival of the galaxy. Mass Effect 3 is the final title of the Reaper trilogy and is an intensely action-packed computer role-playing game. Due to the threat of the Reapers' galactic life form, Commander Shepard has to unite all the races to an alliance to strike back. You slip into the roles of Commander Shepard and have the opportunity to customize and shape his character according to your ideas. You can influence events and explore new planets, form alliances, and fight the Reapers once and for all. The graphics and the sound were perceived as very positive by the testers: "The graphics are very well done and detailed" (Marco, 18 years). Especially the futuristic sound met with much approval from the inspectors: "The sound effects make the game look much more realistic" (Maren, 17 years). Even if most of the conflicts can only be solved in a combative way, there are always conflicts in between, which can be avoided by intelligent selection of dialogue options. In violent depictions, the game rarely becomes explicit.

Where can I buy a Mass Effect 3 Key?

With GameGator, you are able to compare 10 deals across verified and trusted stores to find the cheapest Mass Effect 3 Key for a fair price. All stores currently listed have to undergo very specific testing to ensure that customer support, game deliveries, and the game keys themselves are of the highest quality. To sweeten the deal, we offer you specific discount codes, which you will not be able to find anywhere else. This allows us to beat all competitor prices and provide you with the cheapest, most trustworthy deals. If the current cheapest price of $12.62 for Mass Effect 3 is too high, create a price alert and we will alert you through email, SMS, or discord the moment the Mass Effect 3 price matches your budget.

Can I play Mass Effect 3 immediately after the purchase?

What store should I choose for the best Mass Effect 3 Deal?