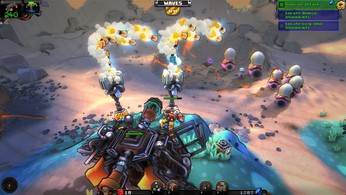 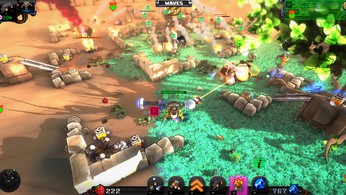 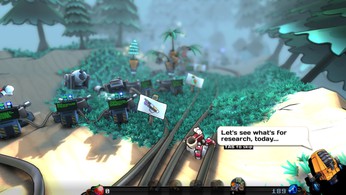 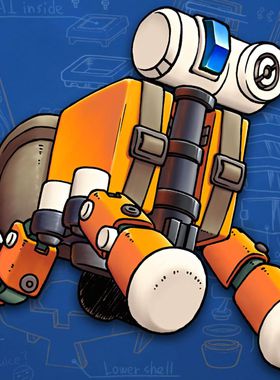 A super frantic Arcade Tower Defense, McDROID starts gently then progressively challenges your trigger finger and your wits (and your sanity) as you multitask like a robotic-spider-doggy-thing: running, shooting, building base, herding, healing, harvesting, repairing, planting, upgrading, researching, frying giant snail-hammer-thing with a giant-tesla-on-your-back (it actually happens).

Defend your shuttle against a variety of alien species as they mutate, corrupt the ground or even turn your crops against you. Load up on, play solo campaign or join in up to 3 people in survival arenas and take the battle to the enemy. If it gets too crazy, turtle up behind your defensive perimeter and assume direct control of the turrets.

Crash landing on their home planet, McDROID the robot and her brother Shuttle find everything too quiet, their sentient Planet is now mute, lobotomized by something evil. As they venture on a quest to heal her hearts, they encounter various strange critters and must use creative strategies.

Where can I buy a McDroid Key?

With GameGator, you are able to compare 5 deals across verified and trusted stores to find the cheapest McDroid Key for a fair price. All stores currently listed have to undergo very specific testing to ensure that customer support, game deliveries, and the game keys themselves are of the highest quality. To sweeten the deal, we offer you specific discount codes, which you will not be able to find anywhere else. This allows us to beat all competitor prices and provide you with the cheapest, most trustworthy deals. If the current cheapest price of $2.99 for McDroid is too high, create a price alert and we will alert you through email, SMS, or discord the moment the McDroid price matches your budget.

Can I play McDroid immediately after the purchase?

What store should I choose for the best McDroid Deal?