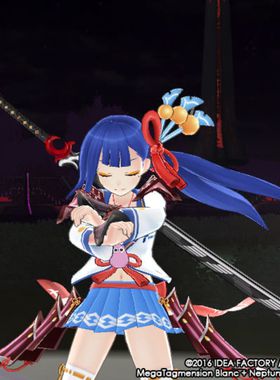 Fight off zombie hordes with friends in the first multiplayer game in the Neptunia series, MegaTagmension Blanc + Neptune VS Zombies for the PlayStation Vita system. It is a sequel to the high intensity hack n slash action game Neptunia U. Set in Gamicademi, Gamindustris academy for CPUs and CPU candidates, Blanc and friends must film a movie to save their school, fend off zombies, and look cute at the same time. Play with up to three friends in the multiplayer mode or, with two support characters to boost statuses in battle, tag team with another character, including new characters, Tamsoft and Uzume Tennouboshi, and familiar faces, Plutia, Peashy, Dengekiko, and Famitsu, to Nep up some zombies. Additionally, you can stylize characters with accessories like glasses, eye patches, and masks to make sure you look extra cute while slaying zombies.

Where can I buy a MegaTagmension Blanc Key?

With GameGator, you are able to compare deals across verified and trusted stores to find the cheapest MegaTagmension Blanc Key for a fair price. All stores currently listed have to undergo very specific testing to ensure that customer support, game deliveries, and the game keys themselves are of the highest quality. To sweeten the deal, we offer you specific discount codes, which you will not be able to find anywhere else. This allows us to beat all competitor prices and provide you with the cheapest, most trustworthy deals. If the current cheapest price of $9.99 for MegaTagmension Blanc is too high, create a price alert and we will alert you through email, SMS, or discord the moment the MegaTagmension Blanc price matches your budget.

Can I play MegaTagmension Blanc immediately after the purchase?

What store should I choose for the best MegaTagmension Blanc Deal?