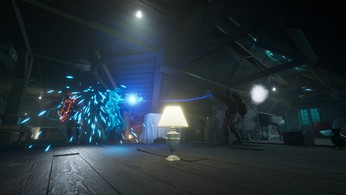 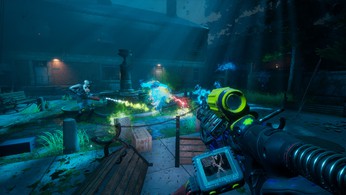 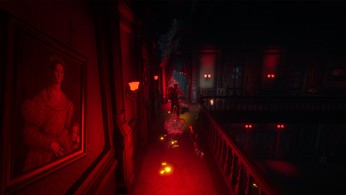 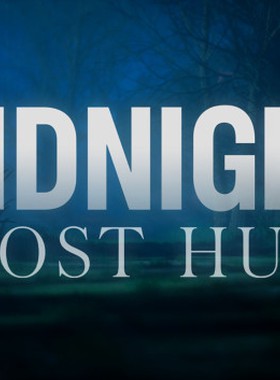 Lying in wait across a series of cursed locations, relentless spirits stalk the halls. Assigned to eliminate them are the Ghost Hunters, armed to the teeth with the ghoul-busting tech to banish them to another realm! Play both Ghost and Hunter in a chaotic 4v4 struggle between the living and the dead.

As a Ghost, conceal yourself inside seemingly harmless pieces of furniture to evade preying Hunters… but when their backs are turned, turn the environment against them with telekinetic bombardment. No chair, lamp, or grandfather clock is innocent in this hijinks-heavy frenzy. The fun isn't over yet... when the clock strikes twelve, the witching hour begins, and the Hunters become the Hunted. The tables turn and Ghosts become supercharged, giving Hunters a limited amount of time to survive their vengeful wrath.

Play together and communicate with your team and ensure a triumphant victory, giving each other pointers on the paths enemies tend to tread. Create synergies with your team's abilities to outthink and outwit your opponents. The restrictions of reality don't apply to Ghosts, of course. Claim your supernatural powers, which include turning invisible, causing furniture to float, and conjuring a dangerous Ghostly miasma. Ghosts can even hide in plain sight by masquerading as a Hunter's doppelgänger!

Where can I buy a Midnight Ghost Hunt Key?

With GameGator, you are able to compare 10 deals across verified and trusted stores to find the cheapest Midnight Ghost Hunt Key for a fair price. All stores currently listed have to undergo very specific testing to ensure that customer support, game deliveries, and the game keys themselves are of the highest quality. To sweeten the deal, we offer you specific discount codes, which you will not be able to find anywhere else. This allows us to beat all competitor prices and provide you with the cheapest, most trustworthy deals. If the current cheapest price of $13.24 for Midnight Ghost Hunt is too high, create a price alert and we will alert you through email, SMS, or discord the moment the Midnight Ghost Hunt price matches your budget.

Can I play Midnight Ghost Hunt immediately after the purchase?

What store should I choose for the best Midnight Ghost Hunt Deal?