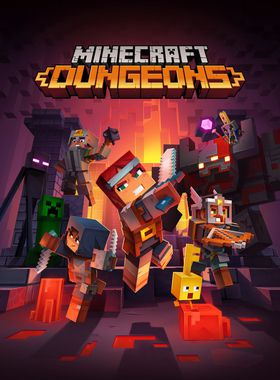 MC Dungeons is the last turn of the screw in the universe created by Mojang, a role-playing game in which we must go through dungeons alone or in the company of 3 friends (online or local game). It has been released for Xbox One, PC, PS4, and Nintendo Switch, keeping all the same playable features.

Despite the change of genre, towards a more role-playing tone in the line of Blizzard's Diablo series, here there are some usual details of the Minecraft universe, like the environments and characters built with all kinds of cubes, the presence of sword and armor spells or the Creepers.

All this with an exciting development, very oriented to the cooperative, and with a development suitable to play in family, even with children from 7 years old on. A simple title, but full of secrets and lots of fun.

Play alone or with up to four players, explore wildly crafted levels, collect treasures, upgrade your equipment, and fight monsters to save the villages and destroy the evil. In addition to mines, you'll be on your way to swamps and canyons. Unlike other Minecraft titles, a Minecraft Dungeons Key is based on the Unreal Engine. The game will continue to receive enhancements and changes after launch with regular free updates. Minecraft itself has continued to grow over the past ten years, not only in terms of player count, but also in terms of content with new mobs, creatures, blocks, and mechanics. The game has developed in more or less regular intervals since launch. Players will still be able to enjoy new content after the start of Minecraft Dungeons, but not everything will be for free forever.

Where can I buy a Minecraft: Dungeons Key?

With GameGator, you are able to compare 22 deals across 6 verified and trusted stores to find the cheapest Minecraft: Dungeons Key for a fair price. All stores currently listed have to undergo very specific testing to ensure that customer support, game deliveries, and the game keys themselves are of the highest quality. To sweeten the deal, we offer you 4 specific discount codes, which you will not be able to find anywhere else. This allows us to beat all competitor prices and provide you with the cheapest, most trustworthy deals. If the current cheapest price of $17.46 for Minecraft: Dungeons is too high, create a price alert and we will alert you through email, SMS, or discord the moment the Minecraft: Dungeons price matches your budget.

Can I play Minecraft: Dungeons immediately after the purchase?

What store should I choose for the best Minecraft: Dungeons Deal?