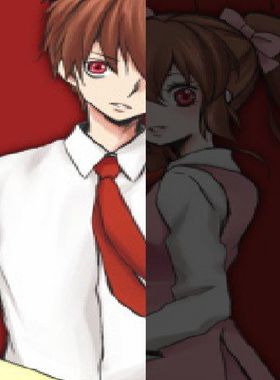 MISAO is a horror-adventure game in which you search for a young girl who has disappeared in a cursed school.

Her name is Misao. She was a classmate of the players character.

Quiet and reclusive, this plain girl was often the target of bullies.

Since the day she disappeared, rumors spread throughout the school of unnatural phenomena.

The children called it "Misaos curse"...

In this game you can choose a female or male protagonist.

This will not have a major impact on the story itself, but some of the dialogue and scenes differ slightly for the different genders and personalities.

A young girl who went missing. In the classroom she is considered is a plain, reclusive girl. Her grudge is at the root of this story.

A boy with a handsome face, popular with the girls. But he is no knight in shining armor.

An attractive girl, popular with the boys. Nicknamed "Otome".

A girl with her head in the clouds. She has a thing for her teacher Sohta.

She is the ringleader of the bullies who harassed Misao.

A boy with a mature, collected personality. A childhood friend of Misao.

A handsome, kind teacher who has earned the respect of his students.

President of the student council. A mysterious figure who seems to know a lot about recent events.

A mysterious young woman who got her name from spending copious amounts of time in the library. She can offer the player hints.

Where can I buy a Misao Key?

With GameGator, you are able to compare deals across verified and trusted stores to find the cheapest Misao Key for a fair price. All stores currently listed have to undergo very specific testing to ensure that customer support, game deliveries, and the game keys themselves are of the highest quality. To sweeten the deal, we offer you specific discount codes, which you will not be able to find anywhere else. This allows us to beat all competitor prices and provide you with the cheapest, most trustworthy deals. If the current cheapest price for Misao is too high, create a price alert and we will alert you through email, SMS, or discord the moment the Misao price matches your budget.

Can I play Misao immediately after the purchase?

What store should I choose for the best Misao Deal?