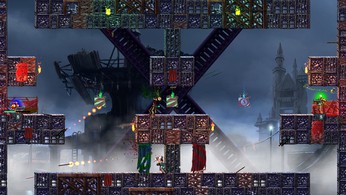 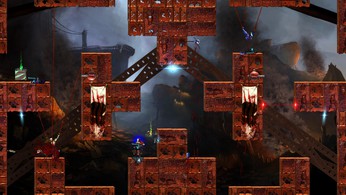 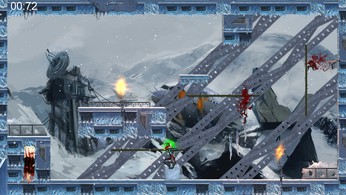 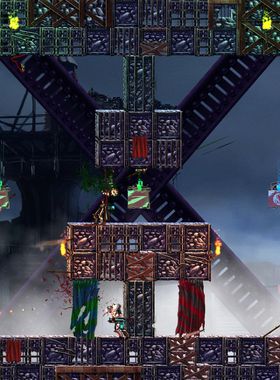 You are 4 friends. On a couch. You have 4 controllers. All you need is a post-apocalyptic excuse to duke it out. Only you never thought you'd love a fungi spewing gun that always leads to the same end result: glorious dismemberment. Moribund is a local multiplayer game that takes place in a post apocalyptic world where a highly aggressive fungus strain has devoured most of the life. The gameplay is fast paced and has an "easy to learn, hard to master" approach. Two to four players can play simultaneously.

Each player has a gun with two firing modes. The first mode is used to immobilize the enemy. While the enemy is immobilized, you can charge you harpoon (your second firing mode) and shoot it against the helpless enemy. If he hasnt escaped then his gory, splattery death is guaranteed. Simple right? But when you add 4 players, a couple of hazards and power ups in the mix everything becomes much more exciting.

A wide variety of multiplayer levels (80 levels split over 8 settings, each with its own graphical environment, mechanics, and music track).

Two multiplayer game modes (Free for all and Team battle).

Eight characters each with his own unique personality and voice acting.

The glorious rag doll. The pillar of the game allowing ever-unique dismemberments and deaths.

Where can I buy a Moribund Key?

With GameGator, you are able to compare 7 deals across verified and trusted stores to find the cheapest Moribund Key for a fair price. All stores currently listed have to undergo very specific testing to ensure that customer support, game deliveries, and the game keys themselves are of the highest quality. To sweeten the deal, we offer you specific discount codes, which you will not be able to find anywhere else. This allows us to beat all competitor prices and provide you with the cheapest, most trustworthy deals. If the current cheapest price of $1.01 for Moribund is too high, create a price alert and we will alert you through email, SMS, or discord the moment the Moribund price matches your budget.

Can I play Moribund immediately after the purchase?

What store should I choose for the best Moribund Deal?