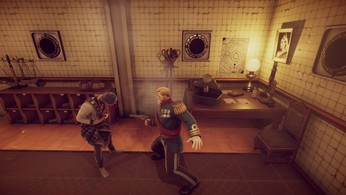 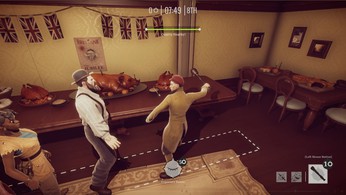 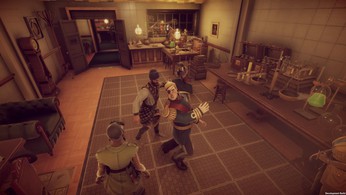 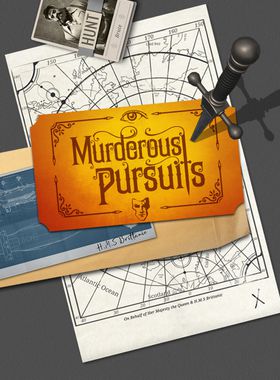 Murderous Pursuits is a multiplayer, kill-or-be-killed, stealth-em-up for 1-8 players. For those interested in having a murderously rambunctious time, Mr. X cordially invites you and other players to sneak up and stab the living daylights out of each other. Developed by members of the team behind The Ship, and the studio that made The Ship: Remasted, Murderous Pursuits will soon have you experiencing the giddy joy of subterfuge to a level that has rarely been experienced since the late 1890's.Kill Your QuarryAct like an unassuming passenger to avoid revealing yourself, locate high-scoring weapons, and stalk and kill your targets in a manner that befits your station as a right dodgy villain.Choose Your MethodsEmploy a variety of abilities, including disguise, flash, and counter, to outmanoeuvre your adversaries and carry out your diabolical plan.Pick Your HunterTake your pick from a line-up of nefarious killers – each as deadly as the next. From the cold and calculating Duchess to the wise-guy Dodger.Stay ComposedKeep your cool and use the busy, reactive environments to your advantage, hide in plain sight and strike with deadly timing to get the jump on your quarry.Key Features:

Play solo or online multiplayer with up to 8 players, featuring support for custom game options and wickedly intelligent bots
Hunt in four sumptuous locations aboard the HMCS Britannic - a state-of-the-art, colonial time ship. Blend in with the festivities in the richly decorated Music Hall or wait in the dark corners of the Engine House to pounce on your prey
Choose from eight playable characters. Pick your preferred archetype and skin, then blend in with the crowd to avoid detection
Master the use of five abilities – only two of which can be chosen each match, so choose wisely
Earn favour to win - Simple killing won't cut it. Be discrete, commandeer a high-value weapon, strike quickly and dance over your quarry's lifeless body to earn Mr. X's favour

Where can I buy a Murderous Pursuits Deluxe Edition Key?

With GameGator, you are able to compare 10 deals across verified and trusted stores to find the cheapest Murderous Pursuits Key for a fair price. All stores currently listed have to undergo very specific testing to ensure that customer support, game deliveries, and the game keys themselves are of the highest quality. To sweeten the deal, we offer you specific discount codes, which you will not be able to find anywhere else. This allows us to beat all competitor prices and provide you with the cheapest, most trustworthy deals. If the current cheapest price of $2.90 for Murderous Pursuits is too high, create a price alert and we will alert you through email, SMS, or discord the moment the Murderous Pursuits price matches your budget.

Can I play Murderous Pursuits Deluxe Edition immediately after the purchase?

What store should I choose for the best Murderous Pursuits Deluxe Edition Deal?