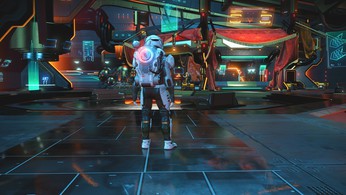 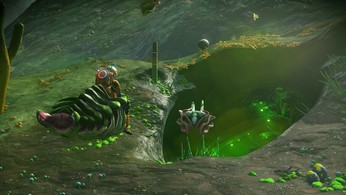 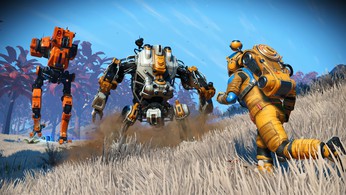 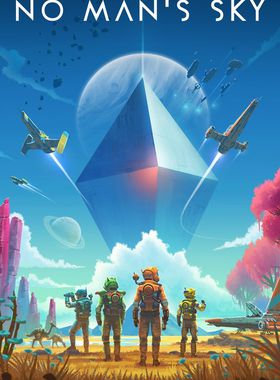 About No Man's Sky

No Man's Sky used to be one of the big disappointments of the game year 2016. It was expected to be an exciting space sandbox - including a multiplayer mode, exciting discoveries in an infinite universe, an interesting storyline and giant sand worms. What players back then received was a repetitive resource grind on very similar looking brightly coloured planets that all somehow looked the same. Now, two years have passed and the developers of Hello Games have been busy patching No Man's Sky. The latest update has thankfully included new game elements, like a multiplayer mode, base building, improved crafting and more varied planets and mission types. No Man's Sky is very close to its vision this time around. However, it is still no game for story fans, even though the Atlas Rises added a 30 hour long campaign. You can play the storyline parallel to the journey to the center of the galaxy. Once you have received a signal from a mysterious alien named Artemis, you follow his tracks. You will find records of other aliens and you have to find out exactly what happened to them.

Where can I buy a No Man's Sky Key?

With GameGator, you are able to compare 37 deals across verified and trusted stores to find the cheapest No Man's Sky Key for a fair price. All stores currently listed have to undergo very specific testing to ensure that customer support, game deliveries, and the game keys themselves are of the highest quality. To sweeten the deal, we offer you specific discount codes, which you will not be able to find anywhere else. This allows us to beat all competitor prices and provide you with the cheapest, most trustworthy deals. If the current cheapest price of $14.18 for No Man's Sky is too high, create a price alert and we will alert you through email, SMS, or discord the moment the No Man's Sky price matches your budget.

Can I play No Man's Sky immediately after the purchase?

What store should I choose for the best No Man's Sky Deal?