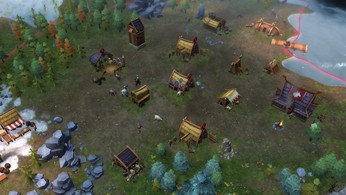 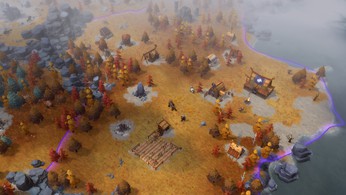 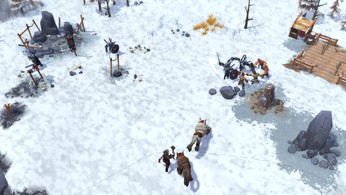 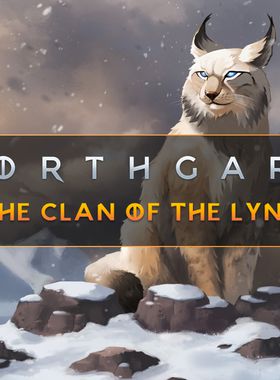 Led by Mielikki, the Beastmaster, the Clan of the Lynx have an exceptional connection with nature. Proud Hunters, their excellent archery skills and unique luring technique are more than enough to ensure the ongoing prosperity of their people. The Clan adopted the graceful but threatening lynx's Brundr & Kaelinn when they were just cubs, raising them to serve as the eyes of the clans esteemed leader and a force to be reckoned with on the battlefield.

Earn Hunting Trophies on animal kills. You can summon Brundr and Kaelinn to your Training Camp. Mielikki the Beastmaster is weaker than other warchiefs but does not cost iron. The Archery Range replaces the Axe Thrower Camp. The Trackers they train are ranged units shooting a wide variety of arrows. The Path of the Hunter replaces Military Paths. Spend Hunting Trophies to unlock powerful abilities for Brundr, Kaelinn and the Trackers.

A fierce huntress in her youth, this proud and capable leader now rules the wildlife of Northgard and sees only through her faithful lynx companions eyes. While her advanced age may limit her effectiveness on the battlefield, she more than makes up for this with her unrivalled command over the wildlife that inhabits these lands who will fight for her and her people without hesitation.

Where can I buy a Northgard - Brundr & Kaelinn, Clan of the Lynx Key?

With GameGator, you are able to compare 14 deals across verified and trusted stores to find the cheapest Northgard - Brundr & Kaelinn, Clan of the Lynx Key for a fair price. All stores currently listed have to undergo very specific testing to ensure that customer support, game deliveries, and the game keys themselves are of the highest quality. To sweeten the deal, we offer you specific discount codes, which you will not be able to find anywhere else. This allows us to beat all competitor prices and provide you with the cheapest, most trustworthy deals. If the current cheapest price of $2.29 for Northgard - Brundr & Kaelinn, Clan of the Lynx is too high, create a price alert and we will alert you through email, SMS, or discord the moment the Northgard - Brundr & Kaelinn, Clan of the Lynx price matches your budget.

Can I play Northgard - Brundr & Kaelinn, Clan of the Lynx immediately after the purchase?

What store should I choose for the best Northgard - Brundr & Kaelinn, Clan of the Lynx Deal?