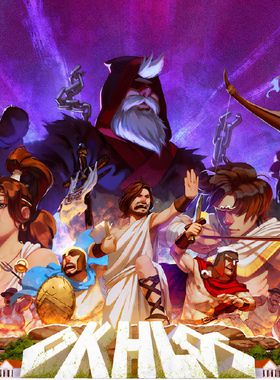 Squeeze into your toga and slide on your sandals to rally the angry mobs of Okhlos and bring down the oppressive god of mythological Greece! Your beloved people will not longer stand for the abuse from their deities and take up arms against them and taking down anything and everything in their path. Topple the beastly minotaur, bring down sacred temples, and confront the almighty Olympians themselves while recruiting and balancing your unruly mob with warriors, peasants, slaves and even livestock in their quest for freedom from Mount Olympus! It's total anarchy in the birthplace of democracy!

The people are angry and have united behind the noble philosophers to do their bidding to take down the soldiers, mythical beasts and temples under the control of the twelve vile gods.

Carefully recruit your followers from warriors, peasants, slaves and beasts of burden and unlock special units or swap units for one of 100 legendary heroes to upgrade the mob and increase their savagery. Wield the power of Heracles, Leonidas, Pandora, and Socrates to turn your mischievous gang into a formidable army!

Where can I buy a Okhlos Key?

With GameGator, you are able to compare 5 deals across verified and trusted stores to find the cheapest Okhlos Key for a fair price. All stores currently listed have to undergo very specific testing to ensure that customer support, game deliveries, and the game keys themselves are of the highest quality. To sweeten the deal, we offer you specific discount codes, which you will not be able to find anywhere else. This allows us to beat all competitor prices and provide you with the cheapest, most trustworthy deals. If the current cheapest price of $1.41 for Okhlos is too high, create a price alert and we will alert you through email, SMS, or discord the moment the Okhlos price matches your budget.

Can I play Okhlos immediately after the purchase?

What store should I choose for the best Okhlos Deal?