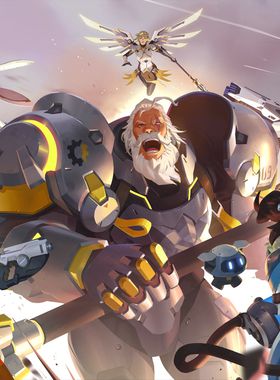 Take on the roles of the world's heroes and fight together with other players in cooperative missions. Level up and fight numerous threats all over the world in Overwatch 2. Expect an entirely new hero lineup, new maps in known locations around the world, and new map types.

Overwatch 2 marks the dawn of a new era for the series' world-renowned 6v6 combat. Not only will all of the heroes, maps, and game modes from the original game - including achievements and collections - be adopted, but the game also adds several new playable heroes to the ever-growing hero squad. The new map type Thrust introduces two teams fighting to move the map target to the enemy side using a robot.

Explore the next chapter of Overwatch with an epic storyline and an all-new co-op experience. In the action-packed, story mission, players witness the dawn of a new era as Winston, Tracer, and other well-known members of Overwatch join forces with a new generation of heroes. Participate in the unfolding global crisis in a series of gripping and highly dangerous four-player mission. As the story unfolds, players take on the roles of different heroes and work together to defend the world from the Omnic forces of Zero Sector, uncovering the background to the robot attacks and confronting new threats across the planet.

The battle continues with hero missions in which Overwatch's team pushes the limits on missions around the world, defending cities against robot attacks, taking out elite Talon agents, and fighting the malevolent forces that threaten the world. In this high replay value mode, players can level up with their favourite heroes and unlock powerful customization options that will enhance their abilities in Co-op mode. Reinhardt's Fire Blast can be improved to set nearby enemies on fire, while Tracer's Pulse Bomb can trigger devastating chain reactions.

Where can I buy a Overwatch 2 Key?

With GameGator, you are able to compare deals across verified and trusted stores to find the cheapest Overwatch 2 Key for a fair price. All stores currently listed have to undergo very specific testing to ensure that customer support, game deliveries, and the game keys themselves are of the highest quality. To sweeten the deal, we offer you specific discount codes, which you will not be able to find anywhere else. This allows us to beat all competitor prices and provide you with the cheapest, most trustworthy deals. If the current cheapest price for Overwatch 2 is too high, create a price alert and we will alert you through email, SMS, or discord the moment the Overwatch 2 price matches your budget.

Can I play Overwatch 2 immediately after the purchase?

What store should I choose for the best Overwatch 2 Deal?