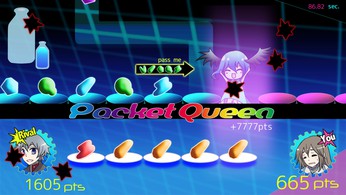 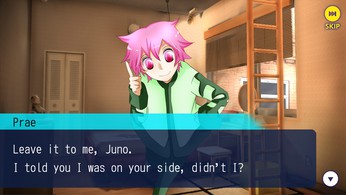 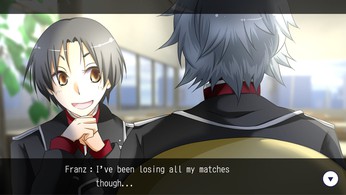 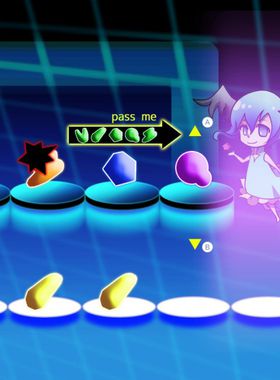 Divide up the packets that appear one after another, and aim to get a higher score than your opponent. This is a competitive-type active solitaire game where you aim for a high score by gathering the necessary packets while avoiding specific colours, and putting them together in poker-style hands.

There are 39 stickers to collect based on how you play. Includes VS Mode where you can compete against other players over the Internet. Aim for a high rank after completing story mode!

Juno is a girl living in Gaiapolis, who works hard every day to become independent. She started working in data salvage because she heard that it pays well, but as a beginner, she just cant seem to increase her income. If only there was some way to increase her skills so that she could tackle more difficult assignments...

Just as shes thinking this, the AI Prae, who lives in her head, suggests a certain game. The title of the game is Packet Queen and just playing it increases ones technical abilities. Juno lightheartedly decides to give it a go, unaware that the game conceals an outrageous secret!

Where can I buy a Packet Queen # Key?

With GameGator, you are able to compare deals across verified and trusted stores to find the cheapest Packet Queen # Key for a fair price. All stores currently listed have to undergo very specific testing to ensure that customer support, game deliveries, and the game keys themselves are of the highest quality. To sweeten the deal, we offer you specific discount codes, which you will not be able to find anywhere else. This allows us to beat all competitor prices and provide you with the cheapest, most trustworthy deals. If the current cheapest price of $4.99 for Packet Queen # is too high, create a price alert and we will alert you through email, SMS, or discord the moment the Packet Queen # price matches your budget.

Can I play Packet Queen # immediately after the purchase?

What store should I choose for the best Packet Queen # Deal?