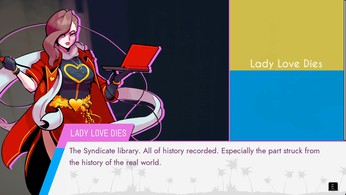 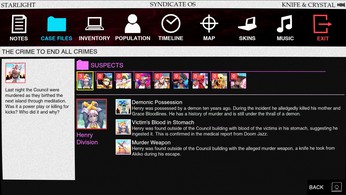 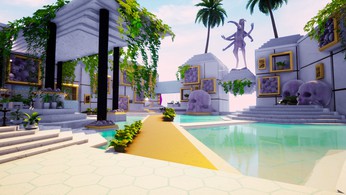 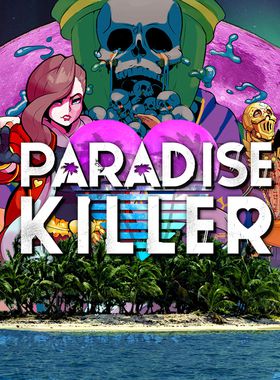 An island outside of reality. A rogue human civilization hoping to resurrect dead alien gods. A murder behind locked doors. Paradise is an island that regenerates every few millennia. The psychic power that the alien worshipers within release into the universe is meant to feed and eventually resurrect their fallen deities. But this force also attracts undesired interest from demons, who eventually corrupt each island — until a new alternate reality is birthed by the Council.

The system isn't perfect, but it will be one day — on Perfect 25, the next island-to-be. But on the eve of rebirth, the Council is murdered and Paradise is killed. In the aftermath, the "investigation freak" Lady Love Dies is summoned from exile to find the culprit. This is the crime to end all crimes. What are the facts? What are the truths? Are they the same? You are tasked with finding the killer and building an airtight case against them. Take your case to trial and argue your interpretation of the evidence. Only when someone is successfully convicted can the crime be considered solved and Paradise be saved.

Where can I buy a Paradise Killer Key?

With GameGator, you are able to compare 18 deals across verified and trusted stores to find the cheapest Paradise Killer Key for a fair price. All stores currently listed have to undergo very specific testing to ensure that customer support, game deliveries, and the game keys themselves are of the highest quality. To sweeten the deal, we offer you specific discount codes, which you will not be able to find anywhere else. This allows us to beat all competitor prices and provide you with the cheapest, most trustworthy deals. If the current cheapest price of $0.75 for Paradise Killer is too high, create a price alert and we will alert you through email, SMS, or discord the moment the Paradise Killer price matches your budget.

Can I play Paradise Killer immediately after the purchase?

What store should I choose for the best Paradise Killer Deal?