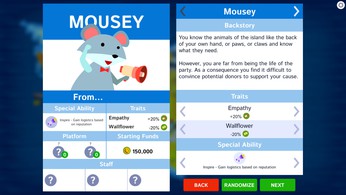 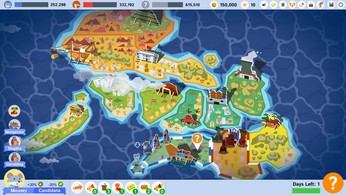 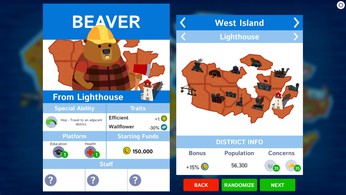 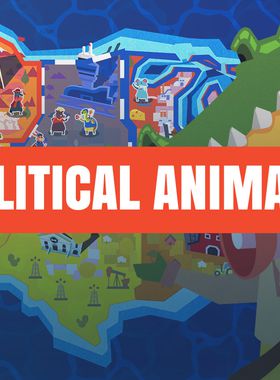 Political Animals is an election simulation game set within a world populated by corrupt crocodiles and meritocratic mice. In a political contest where corruption is always around the corner, we want players to find out how incorruptible they really are. Do you have the integrity of Mousey or the ruthlessness of Croccy? Will you fight your campaign on issues and in the best interests of the people, or will you succumb to the easier path of bribery and intimidation? Will you win votes...or will you buy them?

Each turn you spend points to move your candidate and their supporting agents around the political landscape to whip up popular support. You can bribe the voters to support you, raise funds from the wealthy, give gifts to the influential local district patrons, or hold rallies to build grass-roots support from the electorate. Along the way, expect to encounter random events that test your moral mettle, scandals both real and fabricated

This new turn-based strategy game is developed by Philippines-based studio Squeaky Wheel and published by Democracy-3 developers Positech Games. Political Animals features a choice of playable characters, a choice of different maps and a number of strategies you can employ to win over the population, district by district.

Where can I buy a Political Animals Key?

With GameGator, you are able to compare 4 deals across verified and trusted stores to find the cheapest Political Animals Key for a fair price. All stores currently listed have to undergo very specific testing to ensure that customer support, game deliveries, and the game keys themselves are of the highest quality. To sweeten the deal, we offer you specific discount codes, which you will not be able to find anywhere else. This allows us to beat all competitor prices and provide you with the cheapest, most trustworthy deals. If the current cheapest price of $11.44 for Political Animals is too high, create a price alert and we will alert you through email, SMS, or discord the moment the Political Animals price matches your budget.

Can I play Political Animals immediately after the purchase?

What store should I choose for the best Political Animals Deal?