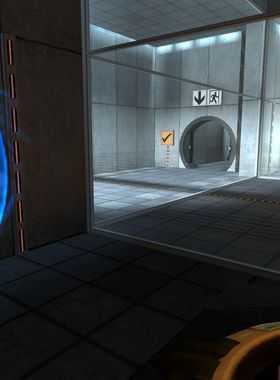 Experience adventure, puzzles and action in a masterful and award-winning combination. Are you ready for Portal?

Portal - A new type of action spectacle that will revolutionize player interaction with the environment in much the same way that the Gravity Gun in Half Life 2 revolutionized the manipulation of objects. Valve's new single-player masterpiece combines adventure, puzzle and action. Portal has already won 70 awards, including more than 30 Game of the Year awards, as well as dozens more for its innovative gameplay and unique story! Are you ready for Portal?

In Portal, you'll have to rethink your options in every situation to find the right solution. Many exciting puzzles await you in this action innovation. Open Portal and move various objects - including yourself - through the room.

Portal has already received more than 40 awards for its innovative gameplay, unique story and the song Still Alive in the credits!

Portal has been available since October 18, 2007 together with Half-Life-2" title="Half-Life 2" target="_blank">Half-Life 2: Episode 2 and Team Fortress2 in the so-called Orange Box. According to the current release list from Publisher Electronic Arts, the retail versions of Team Fortress 2 and Portal will be released on April 10, 2008. Episode Two will not be available separately, but instead the Half-Life 2: Episode Pack will be offered, which includes Half-Life 2, Episode One and Episode Two.

If you buy more than one of these retail versions, the Orange Box (approx. 45 euros) would already be cheaper, with more content. The offer should therefore be aimed at those who really only want to try Team Fortress 2 or just Portal, or who are not interested in these games and would rather play through the adventures of Gordon Freeman.

Where can I buy a Portal Key?

With GameGator, you are able to compare 4 deals across verified and trusted stores to find the cheapest Portal Key for a fair price. All stores currently listed have to undergo very specific testing to ensure that customer support, game deliveries, and the game keys themselves are of the highest quality. To sweeten the deal, we offer you specific discount codes, which you will not be able to find anywhere else. This allows us to beat all competitor prices and provide you with the cheapest, most trustworthy deals. If the current cheapest price of $7.97 for Portal is too high, create a price alert and we will alert you through email, SMS, or discord the moment the Portal price matches your budget.

Can I play Portal immediately after the purchase?

What store should I choose for the best Portal Deal?