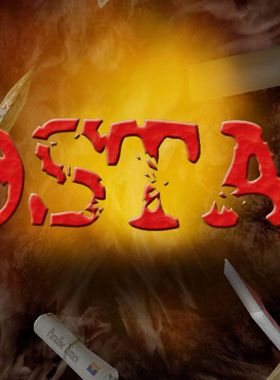 Live a week in the life of "The Postal Dude"; a hapless everyman just trying to check off some chores. Buying milk, returning an overdue library book, getting Gary Coleman's autograph, what could possibly go wrong?

Blast, chop and piss your way through a freakshow of American caricatures in this darkly humorous first-person adventure. Meet Krotchy: the toy mascot gone bad, visit your Uncle Dave at his besieged religious cult compound and battle sewer-dwelling Taliban when you least expect them! Endure the sphincter-clenching challenge of cannibal rednecks, corrupt cops and berserker elephants. Accompanied by Champ, the Dude's semi-loyal pitbull, battle your way through open environments populated with amazingly unpredictable AI. Utilize an arsenal of weapons ranging from a humble shovel to a uniquely hilarious rocket launcher. Collect a pack of attack dogs! Use cats as silencers! Piss and pour gasoline on anything and everyone! YOU KNOW YOU WANT TO!

Where can I buy a Postal 2 Key?

With GameGator, you are able to compare 20 deals across verified and trusted stores to find the cheapest Postal 2 Key for a fair price. All stores currently listed have to undergo very specific testing to ensure that customer support, game deliveries, and the game keys themselves are of the highest quality. To sweeten the deal, we offer you specific discount codes, which you will not be able to find anywhere else. This allows us to beat all competitor prices and provide you with the cheapest, most trustworthy deals. If the current cheapest price of $1.41 for Postal 2 is too high, create a price alert and we will alert you through email, SMS, or discord the moment the Postal 2 price matches your budget.

Can I play Postal 2 immediately after the purchase?

What store should I choose for the best Postal 2 Deal?